Adaptation of one of Benelux most famous children’s novels. Gutsy middle school student Akkie loves soccer. When Akkie is diagnosed with leukemia, she has to fight for her life. As Akkie grows weaker she also grows closer to the boy she has liked all along.

“Achtste Groepers Huilen Niet”, “Eight graders Do not Cry” and titled in Mexico as “Los chicos cool no lloran” is a good dramatic and poignant film that shows part of the life story of Akkie, a 12 y.o. girl that likes to play football at school where also is a popular girl with a good heart and given to his studies.

Her life takes a turn when she is diagnosed with Leukemia and begins the ordeal that turns out to be the cancer treatment in pediatric oncology ward of the hospital where she is treated.

She and her colleagues and friends miss each other but her health continues to deteriorate, so her colleagues organized a friendly football encounter in the hospital grounds where Akkie is the main spectator from the window of her room.

The outcome is predictable from the middle of the movie but incredibly good performance of Hanna Obbeek playing Akkie, along with the rest of the cast have excellent acting combination and makes the movie is really touching, able to touch the heartstrings of moviegoers. 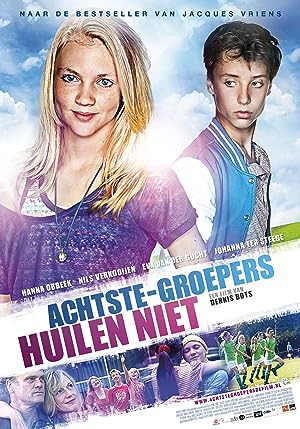