Ivan Mirosnikov, a cheeky young man in the Gorbachev era, is trying to figure out what to do with his life (he’s not in college, and the 2-year mandatory military service is looming large ahead of him). Meanwhile, he lives with his divorced mother, and works as a courier at a Russian newspaper. Through his job, he meets patronizing Professor Kuznetzov and his rebellious daughter Katya. To annoy the professor, Ivan claims to have an affair with Katya. To his surprise, Katya backs his story up.

It is true that Russian film “Courier” is more than 25 years old but its emotional as well as intellectual impact continues to be astounding. Each time a viewer sees it, one is reminded of the struggles for freedom which people of the past had to undergo. It is somewhat autobiographical in nature as it depicts some events which took place in Mr.Karen Shakhnazarov’s life. It was directed by him in 1987 but depicts what happened to him as a youngster two decades ago in 1967. Much of the film is based on the point of view of a non conformist, upper middle class youth whose views indirectly influence his girl friend too. We also get a chance to see a huge chasm in the form of generation gap. Karen Shakhnazarov maintains the balance as he gives an honest perspective of the difficulties faced by parents while raising their children.Courier has its share of comic scenes too but not they cannot be classified as slapstick comedy scenes. The best example of this film’s artistic mischievousness is reflected in a scene wherein the film’s protagonist, claiming some lines by the great Russian poet Pushkin as his own, confidently reads them to impress an influential person. It was in 1987 that film critic Lalit Rao watched “Courier” for the first time on India’s national television network “Doordarshan”.This film was part of a series of award winning foreign films which were shown rather late in night. A whole generation of cinéphiles in India were formed by watching such world cinema classics. 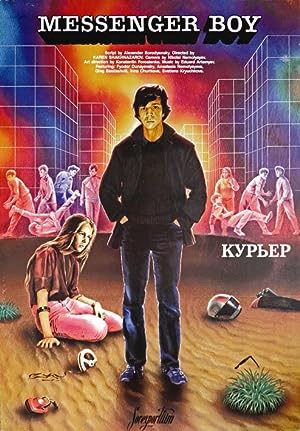