Eugene is an extraordinary talent in classic guitar, but he dreams of being a famous Blues guitarist. So he investigates to find a storied lost song. He asks the legendary Blues musician Willie Brown to help him, but Willie demands to free him from the old-people’s prison first and to really learn the blues on the way to its origin: Mississippi Delta. Eugene doesn’t know yet about Willie’s deal with the devil, that he now wants to revoke.

This is a really, really good movie and I don’t understand why no one ever mentions it or why it is never on cable.

It has everything that I love in a movie: good story, great characters well acted, fine comedy and powerful touching drama. Ralph Macchio is a brilliant young guitar student, Eugene Martone, at Julliard (or some other equally good music school) who does not want to play Mozart. He wants to play guitar like his idol, a long dead blues guitar legend. In search of his dreams, he breaks an elderly black blues player out of a prison nursing home.

The two of them go on an odyssey to the Mississippi Delta in quest of memories and dreams. As in any odyssey, they meet a variety of fascinating and/or dangerous characters along the way. Eugene must also overcome the obstacles and tests that all those who quest must face – until it is time to face the ultimate test against the greatest blues guitarist in the Delta.

I enjoy music, but my knowledge is superficial. I probably wouldn’t know a good guitar riff from a raft, but even I could recognize awesome guitar work in the final sequence of Crossroads.

So, if you like good movies and good acting and great guitar music, please check out Crossroads. If enough of us spread the word, it may no longer be a forgotten classic. 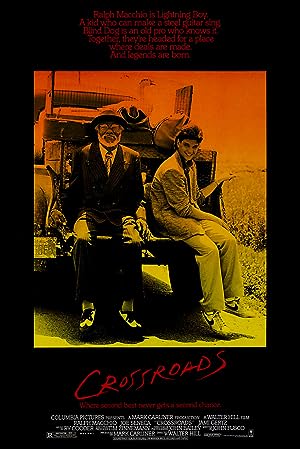 Crossroads (1986)
99 min|Drama, Music, Mystery, Romance|14 Mar 1986
7.1Rating: 7.1 / 10 from 12,917 users
Ralph Macchio is Lightning Boy. A kid who can make a slide guitar sing. Blind Dog is an old pro who knows it. Together, they're headed to a place where deals are made. And legends are born.
Director: Walter Hill
Creator: John Fusco
Actors: Ralph Macchio, Joe Seneca, Jami Gertz, Joe Morton

Be the first to review “Crossroads 1986” Cancel reply