A four part anthology exploring the multitude of emotions and colors in gay relationships.

Four sharply-shot, deeply-felt mini-movies dramatically state their situations and logically reach inevitable conclusions. They’re full of ironically observed modern motivations and complexities. A housewifely youth is so bemused by love he can’t argue with his conservative soldier-husband’s rationalizations for going on a second tour to Iraq. A pretty bottom can boss around even a strong-willed vampire. A well-bred interning Latino art student slavishly endures an Anglo artist’s mistreatment partly from worshipful admiration and largely because of the erotic anger its engenders within him, which he denies until it’s augmented by unexpected pity. A swishy student discovers in his hopeless adoration of a TV-sit-com-type’s unconscious beauty the meaning of all romance, religion, and mythology. His thoughts are a non-stop silent poem in the midst of suburban banality. A shot where we discover his eroticized portrait of the chirpy cutie is almost painfully potent. The beloved boy allows two frolicking kisses which are obviously to him only a game, but to the poet a monumental moment. Casting is unobtrusively racially diverse. 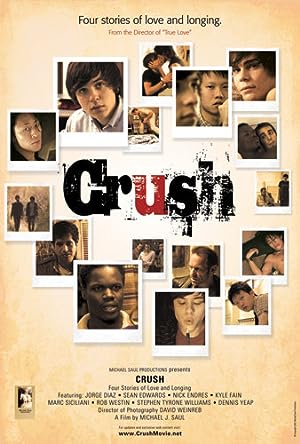 Be the first to review “Crush 2009” Cancel reply