There’s something in this house… Something ancient and dark that remains still, hidden and silent. It can only wait, having been concealed in the shadows for years. In fact, its milieu is darkness. Only in it can it show itself and move. It even takes its name: DARKNESS. It’s lived here since someone tried to call it, more than forty years ago. Because this house hides a secret, a terrible past, an inconceivably evil act… Seven children, faceless people, a circle that must be completed. And blood, lots of blood…

I was quite impressed with Jaume Balaguero’s first feature “The Nameless” which mightn’t have been original, but it was coldly disturbing and effectively suspenseful. Now I heard and read nothing but poor things on his second feature “Darkness”. I couldn’t escape the negativity, and naturally I was expecting something very weak. However came away from it thinking what an interesting failure into supernatural/occult territory. The main problem is due the story’s stale familiarity, which never really is given the chance to rise above its foreseeable hints, embarrassingly shallow script and ludicrously ragged framework. Talk about hazy, and I mean real hazy. It’s cryptic, but extremely convoluted and mundane. Even with Balaguero’s understated, glossed up icy direction, which works in some eerie, and jarring visuals that go a long way of building up a quiet intensity and dreary atmosphere.

Still everything about it is downright mechanical and probably a bit long in the tooth, but it didn’t seem to bother me because I found it rather intriguing despite the muddled, paper-thin intentions. There’s just something lurking behind this jilted mess that I found fascinating, but the narrative does get lost amongst the busy visual style. From the beginning, we learn it’s all about the casually paced build-up, but the shocks are too clichéd (like creaky sounds, moving shadows) and the final pay-off doesn’t have too much of a sting to it. Technically the film looks the part with its dark composition and sterile cinematography, and the weeping, otherworldly music score works a haunting tone. The sound devices are so old-hat and forced, but they’re pinpoint, vitriolic and really do surround you. The characters don’t fair any better, and I thought the performances from a solid cast were modest enough even with their flimsy characterisations. Anna Paquin was suitably appealing and maturely strong, but a awful Lena Olin looked quite uninterested and Iain Glen was terribly uneven. Giancarlo Giannini stays on cruise control, and Stephan Enquist turns in a fine performance. 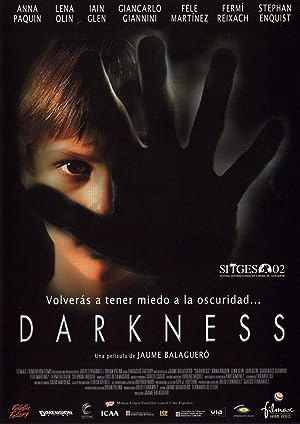 Be the first to review “Darkness 2002” Cancel reply