After the tragic death of her husband, a soldier posted to Afghanistan, Bryony tries to build a new life for herself and her young son, James. Struggling with her own grief she fails to notice that James has become secretive and withdrawn, spending hours alone playing out death scenes with his toys. When things start to go missing and furniture is smashed Bryony blames James but when she confronts him she finds herself facing a reality more terrifying than any nightmare. As her world crashes around her Bryony realises that he ate a way to reconnect with her son she and James will be separated for ever.

Deadly Intent is a nice suspense story. Things go bump in the night as you hope they will (or hope they won’t depending) and the family angle keeps you engaged throughout the film. I enjoyed the visual style of the film and the hard work the filmmakers put into it. The music helped set the tone early on and I always love when we’re fed story hints as it goes along.

Independent films always have some kind of limitation or another, but the director did a nice job crafting a rounded film. I look forward to seeing what they come up with next. It’s a good film to check out this Halloween season so grab some popcorn and curl up on the couch. Lights being off is optional. 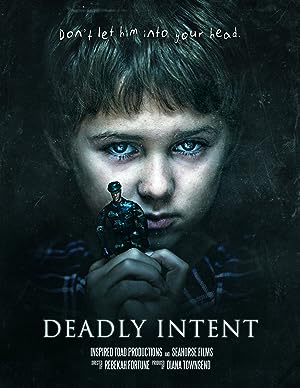 Deadly Intent (2016)
82 min|Drama, Horror, Thriller|11 Apr 2016
3.7Rating: 3.7 / 10 from 246 users
After the tragic death of her husband, a soldier posted to Afghanistan, Bryony tries to build a new life for herself and her young son, James. Struggling with her own grief she fails to …
Director: Rebekah Fortune
Creator: Diana Townsend
Actors: Gus Barry, Adam Birdsey, Ian Birdsey, James Fazakerley

Be the first to review “Deadly Intent 2016” Cancel reply