After having responded to her son’s numerous letters in the guise of his father, a woman hires a stranger to pose as his dad when meeting him.

I saw the movie last night in Los Angeles – it’s only playing at a couple of theaters. Other reviews undoubtedly explain the premise of this film so I’ll dispense with that . . .

Folks looking for a lot of exposition or for a film that screams “Hey! Look over here!!”, or Gerry Butler fans looking for some of that famous sex appeal should be warned. This film is very subtly written and acted. Much of the story is told on the characters’ faces, on what that tells you about what is going on internally within the characters. The characters aren’t archetypes (i.e., villain, precocious kid, cynical older woman) but real and complex people who like the rest of us face life without histrionics or mugging for the camera. No plots are hatched but we see choices have been made in increments so that the idea of hiring a “stranger” to play dad does not seem contrived. I disagree that the audience is being manipulated; in fact, what could be a predictable manipulative ending is not, and is left to the viewer to interpret. The film tells you a story but doesn’t try to tell you how to feel about it. Even the music is simple and subtle, no sweeping rifts to get your emotions going. It is a quiet film with a good story and people you end up caring about – as if you’d peered into their lives for a few days. 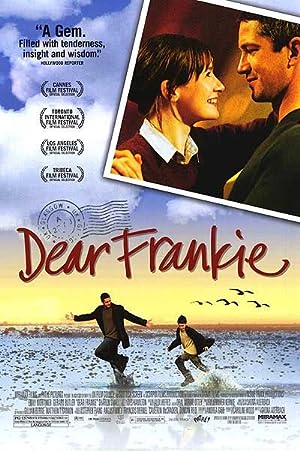 Dear Frankie (2004)
105 min|Drama, Romance|15 Apr 2005
7.7Rating: 7.7 / 10 from 20,641 users
After having responded to her son's numerous letters in the guise of his father, a woman hires a stranger to pose as his dad when meeting him.
Director: Shona Auerbach
Creator: Andrea Gibb (screenplay)
Actors: Emily Mortimer, Jack McElhone, Mary Riggans, Sharon Small

Be the first to review “Dear Frankie 2004” Cancel reply