15 year-old Alejandro Duran, who comes from a religious Latino family, aspires to one day be a Catholic priest. But when Alex discovers a mysterious box he unwittingly unleashes a demonic spirit bent on possessing him. Alex must find a way to defeat this ancient demon, which has been tormenting children since the dawn of man, before it destroys him and everyone he loves. On the surface Devil’s Whisper is a supernatural horror film about demonic possession but at its core it’s a psychological thriller about repressed memories, childhood trauma and the cycle of abuse.

As the lead in this narrative, Luca Oriel gives an absolutely stunning performance as Alex. While I am unfamiliar with his previous works, I cannot praise him highly enough for the way in which he portrays this troubled young man. While Luca has a few other solid credits to his name, if he was not able to immerse himself in the character of Alex, the movie would have floundered into oblivion. His task is to convince the viewers through his incomparable performance that Alex not only wants to be a priest, but he is suffering from supernatural sightings and repressed childhood memories. His parents don’t understand him. His friends don’t understand him. He attempts to fit into the typical crowd of his peers, but there is that something different that you can’t pinpoint which sets him apart as an anomaly. Luca gives an authentic performance that had me in his corner even when he was in the wrong. The pathos and sincerity he injects into this role, as well as the excruciating pain and emotion he displays in several key moments, have shaped this film into the masterpiece of storytelling that it is. Although her role may be incipiently considered small and unimportant, the role of Alicia, Alex’s sister, is played by the captivating seasoned professional, Alison Fernandez. Alison has been featured in a wide variety of works including, Once Upon a Time and Jane, the Virgin amongst other roles. We can thank Alison for providing some cute and fun moments in what would otherwise be a “doom and gloom” film. But don’t minimize her ability to carry off the dramatic and even the bizarre and poignant. Near the end of the film, Alison executes a scene that had me immensely riveted in spite of the fact that I genuinely longed to avert my eyes. While she can capture the essence of the sweet, angelic girl, her experiences with the supernatural will probably leave you breathless and in awe of her uncanny talent. Rick was the reason I even agreed to review this film in the first place, and as Father Cutler, he undeniably makes an impact despite his relatively brief appearances in the movie as a whole. While I know comparatively little about the Catholic faith, the disposition Rick has adopted for this film is undoubtedly in keeping with what I do know of priests. I enjoy the fact that he is a bit nontraditional at times and some of his recommendations, especially to Alex, may be suspect now and then, but his genuine concern for the well-being of his parish is always at the forefront of his mind. He attempts to be as relatable as possible in a century when traditions of the Catholic church are constantly changing and even being devalued. For Father Cutler, his faith is bona fide and organic as opposed to distant and defunct. And the fact that Rick is able to infuse those elements into a Catholic priest is something I greatly respect. Not since Bing Crosby played Father O’Malley have I seen an actor portray a priest with such a pragmatic persona and engaging air. The fact that his character is ex-military only increases his credibility and affability.

In many ways, Rick is the actor who propels the story to its ultimate conclusion. Whenever tragedy strikes this small community, he is there to speak the words of healing and comfort. When Alex confides in him concerning his supernatural sightings, the audience discovers a surprising correlation in the life of Father Cutler himself. Furthermore, Rick’s character proceeds to provide the audience with one of the most bizarre scenes in the entire film, and he does it in such a way that if you do not inwardly leap in unadulterated terror, I will be amazed. I have witnessed Rick handle the supernatural in other films, but his portrayal in this film supersedes those previous undertakings. Indubitably, Rick’s scene by himself in the church is one that will remain with me for the rest of my life inasmuch as it is that potent and masterful. It is Rick’s character (and also Luca’s as well) that brings an ingredient to the film that I had not considered nor expected. In most supernatural films or shows, demons are explained away, killed, or just disappear at the end with no explanation (thus leading to countless opportunities for sequels). Because Adam Ripp and his fellow writers decided to involve the church and its traditions in this film, the religious aspect is emphasized in a way I am not used to seeing. Even the logline that is used to advertise the film”Faith is Not Enough”demonstrates that this film is not your average supernatural thriller. Therefore, when I state that I witnessed and even appreciated the symbols of faith in this film, I must disclose the fact that I also come from a place of faith myself. While I would not characterize this as a Christian film in any sense of the word, I found myself and my beliefs actively challenged on many occasions while I was watching.

While I don’t espouse the entire belief system or theology of this film, I acknowledge that it is not a “faith-based” film, and its purpose is to expose a wide variety of visceral issues that will speak to each viewer individually. Moreover, it is a film that I shall never erase from my mind, and I can only presume that anyone who chooses to experience this film will perceive its relevance far beyond mere entertainment value. 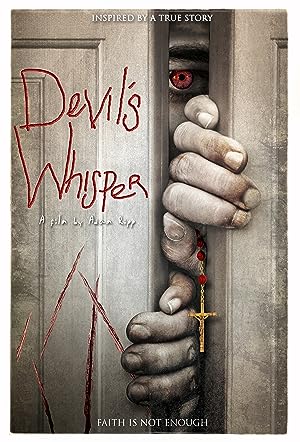 Be the first to review “Devil’s Whisper 2017” Cancel reply