Karl Foyle and Paul Prentice were best mates at school in the Seventies. But when they meet again in present-day London things are definitely not the same. Karl is now Kim, a transsexual, and she has no desire to stir up the past while she’s busy forging a neat and orderly new life. Prentice, on the other hand, has charm but is a social disaster stuck in a dead-end job. His main talent is for getting them both into trouble. Amid the squabbles, they start to fall in love. One night, Kim invites Prentice to a romantic dinner at her flat. Prentice, finding the seduction unexpectedly effective, freaks out. He proceeds to make a public display of both of them and winds up in court. Humiliated and angry, Kim runs away. Only she can save Prentice now, but will true love triumph for a new made woman and an aging punk?

Simple (if that’s the right word) British tale of a hot headed rebel who meets up with an old school chum who’s now a transsexual.

The script as filmed is almost (but not quite) as cloying as a Meg Ryan-Tom Hanks vehicle: it never really panders to the love story and it sacks trite ‘witticisms’ for honest language but it has just as faux-romantic of an ending as You’ve Got Mail or some other bit of schmaltz. However, the riveting performances by its leads help lift this film high above any mainstream pandering mush.

Rupert Graves has a high-voltage sexuality and never slips in his characterization of Paul; it’s so common for actors to give some kind of Kabuki-like performance when playing volatility but he’s amazingly real.

Steven Mackintosh is a revelation as Kim and his heartbreaking nuances capture an inner struggle between the mind and the heart with wonderful simplicity.

Saskia Reeves (perfect in Antonia & Jane) and Neil Dudgeon also stand out as the married couple who Kim turns to for support.

While far from being a great film, it trumps many, many, MANY other movies that try to be honest and believable in their depiction of gay or transsexual romance. 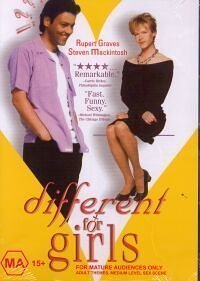 Be the first to review “Different for Girls 1996” Cancel reply