A hard-working lawyer, attached to his cell phone, can’t find the time to communicate with his family. A couple is drawn into a dangerous situation when their secrets are exposed online. A widowed ex-cop struggles to raise a mischievous son who cyber-bullies a classmate. An ambitious journalist sees a career-making story in a teen that performs on an adult-only site. They are strangers, neighbors and colleagues and their stories collide in this riveting dramatic thriller about ordinary people struggling to connect in today’s wired world.

This movie has three parallel stories, with one important thing in common: real lives unravel as their presence on the media, especially the social media, spirals out of control. Moreover, as it turns out, each story ends up intersecting with one or both of the others.

There is Ben, a lonely teen who is hideously deceived and then callously exposed on the Web by two mean-spirited schoolmates. This drives Ben to make a grave decision that will leave his future hanging by a thread and his parents and sister reeling.

Then there are Cindy and Derek, who are trying to grapple with the death of their baby. As if that weren’t enough of an issue in their life, they discover their credit cards have been maxed out. The private eye they hire, Mike, backtracks Cindy’s and Derek’s every online move, with unexpected revelations. Moreover, the result of Mike’s investigation turns out to compound the problem rather than solve it.

Finally, there is Nina, an up-and-coming TV news reporter who gets her hands on the life story of Kyle, an older teen engaging in a salacious line of work performed online in front of a camera. Nina’s TV piece is at first widely applauded, but its broadcast unleashes an avalanche of trouble for both Nina and Kyle, as well as for other people in their career lives.

A ready interpretation of the title “Disconnect” is to associate it with the dangers of “disconnecting” with real people in the real world. And indeed: people in this movie do communicate a lot via text messaging, and in chat rooms. In these spheres, things are sometimes not what they seem—and neither are people: two characters make up another, and communicate with someone else pretending to be that person, with potentially lethal consequences.

But the title “Disconnect” can also be taken as an imperative: “Disconnect!” Log off already! Otherwise, you will forget real existences cannot be edited, backed up, deleted, and restored like virtual ones. Actually, real life in this movie interferes with virtual plots in a way that even the latter take unintended twists and turns.

It turns out Mike not only changes Cindy and Derek’s life (they set out to make a dramatic move as a result of Mike’s investigations), he also is forcibly involved in the story around Ben. Ben’s dad, in turn, is a legal counsel at the TV station where Nina works; that way, he is drawn on two fronts into the fallout from risky behavior of teens on the Internet.

While this is Nina’s immediate connection to another story in this movie, the mere fact that she is a TV personality probably superimposes her story on the others: just as everybody is online these days, everybody still consumes sensational TV news. (Need it even be said: when you turn on your TV, you also “disconnect” from real life.)

The three stories progress at a similar pace and climax at the same time. After all the scheming, searching, plotting, and just plain misunderstanding emanating from cell phones and computer keyboards, the scenes suddenly stop in freeze-frame. Real-world existences clash in an ultimate, inevitable collision. The disconnect comes home to roost. 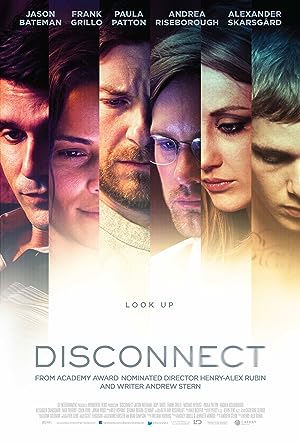 Be the first to review “Disconnect 2012” Cancel reply