“The Dreamers” is all about three young adult upscale hippy types who languish in a flat in Paris in the late 60’s and talk about cinema, politics, sex, and other stuff while sharing some first experiences. Two are brother (Garrel) and sister (Green) identical twins (or so we’re told) who have an almost metaphysical bond and the third is an interloper (Pitt) who falls in lust with the sister. There’s little plot to this slice of young adult life flick which seems to be more of a Bertolucci pet project than a commercial product for the masses. Less than engaging and much less than compelling, “The Dreamers” immerses itself in the esoterics of the place and time to the exclusion of anyone who wasn’t there then. Beautifully filmed and masterfully crafted with some young actors doing superb work under difficult circumstances with plenty of graphic nudity and sex, “The Dreamers” will play best with aficionados of French cinema, Bertolucci fans, etc. Those who are squeamish about sex/nudity should pass. All others, be prepared for a marginally interesting watch. 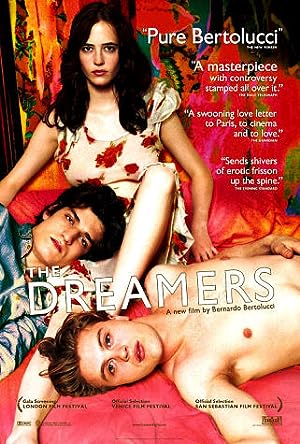 The Dreamers (2003)
115 min|Drama, Romance|20 Feb 2004
7.2Rating: 7.2 / 10 from 100,330 users
A young American studying in Paris in 1968 strikes up a friendship with a French brother and sister. Set against the background of the '68 Paris student riots.
Director: Bernardo Bertolucci
Creator: Gilbert Adair (screenplay), Gilbert Adair (based on the novel)
Actors: Michael Pitt, Eva Green, Louis Garrel, Anna Chancellor

Be the first to review “Dreamers 2003” Cancel reply