Home » Movies in English » Eisenstein in Guanajuato 2015
View cart “Taxi Stories 2017” has been added to your cart.

The venerated filmmaker Eisenstein is comparable in talent, insight and wisdom, with the likes of Shakespeare or Beethoven; there are few – if any – directors who can be elevated to such heights. On the back of his revolutionary film Battleship Potemkin, he was celebrated around the world, and invited to the US. Ultimately rejected by Hollywood and maliciously maligned by conservative Americans, Eisenstein traveled to Mexico in 1931 to consider a film privately funded by American pro-Communist sympathizers, headed by the American writer Upton Sinclair. Eisenstein’s sensual Mexican experience appears to have been pivotal in his life and film career – a significant hinge between the early successes of Strike, Battleship Potemkin, and October, which made him a world-renowned figure, and his hesitant later career with Alexander Nevsky, Ivan the Terrible and The Boyar’s Plot.

Peter Greenaway’s career is beyond any ambitions of commercial success

– his most successful (audience-wise) movies were made in the 80s. Even

then the combination of colors and music, architecture (he is an architect by formation) and composition, his obsessions for sex and death and his bluntness in approaching them were much out of the beaten track. For the last two decades his projects became more and more exploratory, with the moving images being only one of the tools in combinations of multi-disciplinary explorations and experiments that brought together almost every artistic discipline that was invented. Eisenstein in Guanajuato can be seen almost as a return to the more conventional tools of film making. It has a story, and it has a hero and it has a theme, one of these themes film makers love to bring to screen, maybe the ultimate film theme – film making!

If you listen to what Peter Greenaway has to tell about his film (and he speaks a lot as he promotes the film in the international festival tour) Eisentein in Guanajuato is before all a homage to one of the greatest directors in the history of cinema who was Sergei Eisenstein. It also is a social and political commentary, as it deals with what was probably the most exuberant, liberal and care-free period in the life of the screen director of the Soviet Revolution, and also with the sexual orientation of Eisenstein which was kind of a well known secret in his biography, tolerated by the Soviet authorities but maybe also a tool of blackmail by the KGB. The period spent by Eisenstein in Mexico while shooting material never gathered and edited for a film about the country and its revolutions may have been the happiest time in the life of the director already famous for Potemkin and October. It allowed him not only a unique encounter with a culture that was so different from some aspects yet so close from other compared with the Russian culture he knew from home, but also an encounter with himself, with his own demons, his self-denied homosexuality, his tendency to the luxury and the decadence of the bourgeois life, so different from the austerity he left in the Soviet Russia and to which he was condemned to return.

There is almost nothing in this film about Eisenstein’s film making. At no point does he shout ‘Camera!’ or ‘Action!’ – at some moment he even refuses to do so. Peter Greenaway does not try to expose any secrets of the film making art of Eisenstein, but rather deals with the surrounding context that made his films possible. Finnish actor Elmer Bäck brings on screen an Eisenstein who hides his doubts behind exuberance, and his fears behinds carelessness, who is sure of his artistic genius but unaware about his personal charisma. Mexican actor Luis Alberti builds a fine counterpoint to Eisenstein’s character and a credible gay love interest. The camera work does not try to replicate anything that Eisenstein has done on screen, but rather quotes and incorporates fragments of Eisentein’s movies with the visual commentaries of Greenaway. I read some critical opinions about viewers ‘getting tired’ by the too intense camera work – I do not agree with them. When what you see on screen is expressive and interesting you cannot get tired, as one does not get tired of seeing more masterpieces in an art museum, or of listening to fine opera or classical music. Sets are as exuberant and as complex as an architect mind like Greenaway’s can conceive. Overall Eisenstein in Guanajuato was for me a very satisfying and surprisingly entertaining experience. 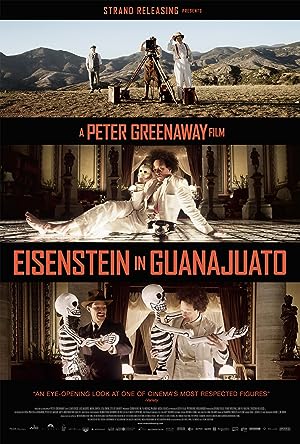 Eisenstein in Guanajuato (2015)
105 min|Biography, Comedy, Drama, Romance|18 Jun 2015
6.3Rating: 6.3 / 10 from 2,260 users
The venerated filmmaker Eisenstein is comparable in talent, insight and wisdom, with the likes of Shakespeare or Beethoven; there are few – if any – directors who can be elevated to such …
Director: Peter Greenaway
Creator: Peter Greenaway
Actors: Elmer Bäck, Luis Alberti, José Montini, Cristina Velasco Lozano

Be the first to review “Eisenstein in Guanajuato 2015” Cancel reply