A Jewish boy, separated from his family in the early days of WWII, poses as a German orphan and is thereafter taken into the heart of the Nazi world as a ‘war hero’ and eventually made a Hitler Youth. Although improbabilities and happenstance are cornerstones of the film, it is based upon a true story.

I have seen many foreign films but Europa Europa ranks really high.

It is the real-life story of a young Jewish man who escapes persecution from the Nazis by masquerading as one. He soon wins the minds and hearts of the Germans he serves with. Some discover his true ethnicity but still help him since he is so likable. He even wins the hearts of some women who fall hard for the likable Josef Peters( the name he takes to pass as a non-Jew Aryan) He becomes so well liked that even his commander wants to adopt him .He goes on to excel in a school for the Hitler Youth and again becomes popular among both his fellow students and teachers. He goes to great lengths to pass as a non-Jew , and many of his methods to achieve that end truly are unorthodox.

The beautiful Julie Delpy plays a young German girl who’s taken by this young man. She however is a fanatical Nazi and the relationship takes on a life of it’s own.

This film is a must see for those of us who are unrepentant movie buffs. 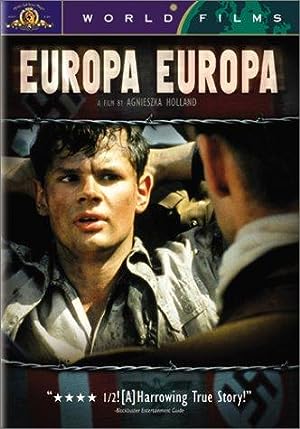