Even Lovers Get the Blues 2016

Ana is sleeping with Hugo, Dalhia with Graciano, Léo with Louis, and Arthur with everyone. Parties and love affairs lead to heart searching, deep desires and the craving to live life to the full. Even Lovers Get the Blues draws the portrait of the love and sexual lives of disenchanted and passionate young people.

Belgian writer/director LAURENT MICHELI’S debut feature film is an audacious look at a tight knit group of 30-something-year-old friends who all seem to have insatiable sex lives which doesn’t seem to make them happy at all. Ana (MARIE DENYS) is sleeping with Hugo (GAËL MALEUX), Dalhia (ADRIANA DA FONSECA) with Graciano (GABRIEL DA COSTA), Léo (SÉVERINE PORZIO) with Louis (ARNAUD BRONSART) and Arthur (TRISTAN SCHOTTE) is sleeping with seemingly half the hot men in Brussels.

The story starts in the early hours of a wintry morning when in their respective apartments they have all just finished having very passionate and noisy sex, some more successful than others. Ana is taking a post coital shower when Hugo has a seizure and literally dies in their bed.

His death seems to affect them all in different ways. A distraught Ana tries to banish her grief by literally having anonymous sex with total strangers, whilst Louis tries to cajole Léo into wanting to have a baby. Meanwhile Graciano who has been having trouble getting aroused takes matters into his own hand to add some spice into his love making with Dahlia, who then kills the attempt by talking too much. However he finds the answer to his problems unexpectedly when the whole group had been out partying and he and Arthur take much more than just a shine to each other.

Fast forward four months and it is now summer and the group decides to take a weekend trip and go camping by a lake in the countryside. By this time Léo and Louis are no longer living together, Arthur has been crashing the whole time on the couch in Graciano and Dahlia’s apartment, and Ana …… well she is still sleeping around.

Whether any of them intended this trip to be any sort of cathartic experience is unclear, but with tensions running high amongst them all, it was clear that there would be tears before bedtime. Probably quite a few of them. The question was if after all the shouting and name-calling ceased, would there any chance of resolution for any, of all of them. And equally important, could having sex actually become fun again?

The fact that this good-looking group of friends are so dysfunctional adds to their charm even though it may mean a tad too much hand-wringing and verbal soul-searching at times. Their relationships are based in both love and respect and they obviously feel they are worth the concerted effort to see if their natural destiny for each one of them is to move forward or end now.

Micheli has each of the characters lay bare their souls in the same way he doesn’t shy away from showing their very explicit love making, which seems something of a norm for edgy European indie dramas this day. His ensemble cast, several with little or no acting experience, gave some beautiful performances making this compelling angst-filled drama so very entertaining.

Even Lovers Get The Blues is a refreshing take on modern romance and how we now deal with sex and sexuality, and is a very impressive movie from Micheli. We cannot wait to see what he comes up with next. 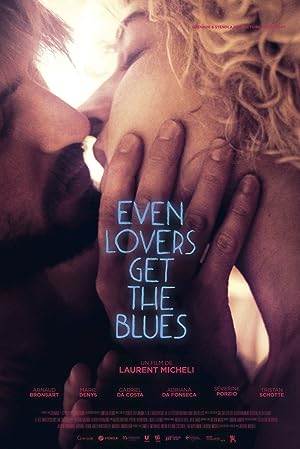