Everywhen is when everything happens at the same time. In the year of 2077 a large count of the worlds population, 3 billion, suddenly disappears. Did they all go to a parallel reality? A 17 year old boy forces himself back from this reality, to try to save his 6 year old brother.

After watching this movie, I read a review that was enlightening about how it is a low budget, amateur made movie. That makes this movie more impressive than if it were a big budget movie by experienced crews.

I thought the video quality, special effects and acting by the two main characters were impressive. The plot was thought provoking but at times I did get confused. Now for my criticisms… The audio was mostly fine (I think there were a few instances of audio clipping) but there was way too much bass in the sound. I have my home theater calibrated well and the bass was so powerful that it shook my projector and the movie was visibly shaky at times because of this. The worst acting was by the woman who played Jane Scott. Her acting style was mainly just having an intense look on her face and looking side to side when she talked. Lastly, the SWAT team in this movie almost seemed inept at times. In most scenes, they had to get into position and were slow to shoot, making them easy targets for the teenage leading characters to kill off.

Overall, I applaud this movie. It reminded me of the American movie called Jumper, which is the highest compliment I can give it. Those involved in creating this movie could become very successful with a little bit more experience and refinement. 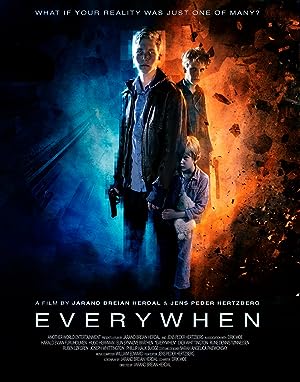 Be the first to review “Everywhen 2013” Cancel reply