A young man returns to his family farm, after a long stay in ex-gay conversion therapy, and is torn between the expectations of his emotionally distant father, and the memories of a past, loving relationship he has tried to bury.

19 year old James’s (Michael Grant) reward for his long stint at a gay conversion therapy course run by religious zealots is not good news. On his return home he is greeted by his father (Tom Wopat) who forced him to go there in the first place, and he immediately learns that all his college fund money has gone. The money was spent on his mother’s funeral expenses and the cost of his own therapy. When his father tells him that he has no chance now of attending the Music School in Boston that he was offered a place at, James suggests that his father sell the family’s apple farm in Vermont to pay for his tuition. The farm has been in the family for generations and his father insists that James will be the next owner, but he has no absolutely no intention of becoming a farmer, and is set on following his dream of becoming a concert pianist.

Asides from this James seems to try to be his level best to be a good son although maybe to honor the memory of his mother than his father who, despite his good intentions, he always seems at odds with. His compliance with the therapy and his willingness to agree to go on a (very chaste) date with the Pastor’s daughter (Lisa Varga) from his church is obviously to appease his father than rather please himself. He positively freaks out when the girl tries to kiss him at the end of their circumspect date.

One day when his father insists he drops a delivery of apples off to the local grocery store, and the door is opened by Charlie (Josh Green) his ex beau who immediately does all dewy eyed, the penny may not drop for James, but it does for us and we know now how this is all going to end up.

image1James is still in semi-robotic mode after his anti-gay therapy so he takes out his frustration on a poor bewildered Charlie but a few days later when Charlie is gay-bashed walking home for work, it is James who insists on playing gallant white knight and giving him a ride home every night so that he is safe. It of course doesn’t stop just there but when they finally get to make out (again) in the Farm’s hay barn they are caught in a state of undress by an angry Pastor’s daughter, which is witnessed by James’s father too.

The part that follows next is a much-needed surprise in the plot and it finishes with a well-reasoned ending that is both realistic and refreshing.

This well-meaning movie from newbie director Kerstin Karlhuber is an interesting take on the whole conversion therapy subject, although asides from a few flashbacks, the focus here is not on the treatment itself but of its effects afterwards. It would probably have benefitted from not being so obvious as to the story’s conclusion quite so early on. Nevertheless some powerful performances from both the extremely talented young Micheal Grant as James, and an unexpected delightful turn as the grumpy father struggling with his sexuality from Tom Wopat, made this a very likable drama 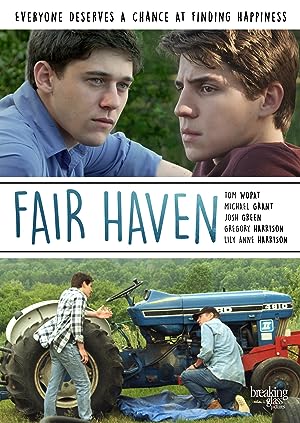 Fair Haven (2016)
90 min|Drama|01 Mar 2017
6.8Rating: 6.8 / 10 from 1,314 users
A young man returns to his family farm, after a long stay in ex-gay conversion therapy, and is torn between the expectations of his emotionally distant father, and the memories of a past, loving relationship he has tried to bury.
Director: Kerstin Karlhuber
Creator: Jack Bryant (story), Jack Bryant, Kerstin Karlhuber (story)
Actors: Tom Wopat, Michael Grant, Gregory Harrison, Jennifer Taylor