In Serbia, Baron Frankenstein lives with the Baroness and their two children. He dreams of a super-race, returning Serbia to its grand connections to ancient Greece. In his laboratory, assisted by Otto, he builds a desirable female body, but needs a male who will be super-body and super-lover. He thinks he has found just the right brain to go with a body he’s built, but he’s made an error, taking the head of a asexual ascetic. Meanwhile, the Baroness has her lusts, and she fastens on Nicholas, a friend of the dead lad. Can the Baron pull off his grand plan? He brings the two zombies together to mate. Meanwhile, Nicholas tries to free his dead friend. What about the Baron’s children?

Well. we can only speculate what Mary Shelley would have made of this! By the time it came to the early 1970’s there was a peculiar trend in European genre cinema for erotic/sleazy Frankenstein films. Amongst others there was The Erotic Rites of Frankenstein and Frankenstein ’80 – both from 1972 – so it can be not too much of a surprise that a year later came the king of this very specific sub-genre, the one and only Flesh For Frankenstein. It was famously produced by New York Pop artist Andy Warhol, along with the similar Blood For Dracula. But it’s a far cry from Warhol’s other art films and unsurprisingly his creative input was pretty negligible. It was filmed in Cinecittà studios in Rome and directed by Warhol acolyte, Paul Morrissey. But irrespective of who did what and why, the main thing about this one is that it’s a bona fide trash classic of the very best kind.

Its blood and guts galore and transgressive sex all the way. But it’s all presented in a camp manner that simply has to be seen to be believed. The acting ranges from insanely over-the-top (Udo Kier) to hilariously under-the-top (Joe Dallesandro). What makes it so very funny is that despite the sheer ridiculousness of proceedings everybody plays it deadpan straight. We have Kier fully committed and out of control as the Nazi-like Baron who dreams of making a new master race; Dallesandro is a local shepherd stud with a hilariously out of place New York accent – he seems more like a Times Square street hustler than a character from the early 19th century; then there is Arno Juering in a bewildering performance as the eye-popping Otto, assistant to the Baron; Monique Van Vooren makes an impression too as the Baron’s over-sexed wife/sister; even the couples incestual offspring are memorably creepy, the little girl being the one and only Nicoletta Elmi who appeared in dozens of Italian horror and giallo flicks in the early 70’s.

Flesh For Frankenstein was also noteworthy for being one of the members of the infamous video nasty list, which of course was a selection of movies deemed criminally obscene by the British authorities back in the early 80’s. It’s an example of an entry from this list where you sort of understand why it caused offence in the first place. Not only does it have a healthy dose of explicit gore – including a hilariously over-the-top finale – but it is wilfully transgressive in other outrageous ways with the brother/sister-husband/wife incest plot strand and the baron’s necrophiliac behaviour with his zombie creations. Of course, all of this excessive content, funny performances and insane dialogue adds up to a must-see movie for anyone with a passing interest in Euro horror from the schlockier end of the scale. On top of all of this, it’s actually a quite handsome looking film, which is perhaps unsurprising given its Cinecittà origins. Suffice to say that all of this adds up to a cult film, truly worthy of the tag. Its additionally well worth seeking out its sister film Blood For Dracula, which is slightly less psychotronic but equally indispensable. 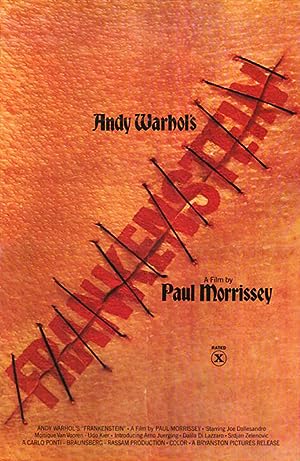 Be the first to review “Flesh for Frankenstein 1973” Cancel reply