Home » Movies in English » Flight of the Navigator 1986

Flight of the Navigator 1986

A 12-year-old boy goes missing in 1978, only to reappear once more in 1986. In the eight years that have passed, he hasn’t aged. It is no coincidence that at the time he “comes back”, a flying saucer is found, entangled in power lines.

This movie is an entertaining fantasy, but there’s quite a bit more to it just beneath the surface. The protagonist is a 12-y/o kid raised, as most are in Western culture, to be incompetent, overly dependent on adults, and untrusting of his own judgment. When he finds himself aboard an alien spacecraft, he naturally first attempts to transfer that dependency to the robotic pilot Max, which, all-seeing eye and all, represents the omniscient grown-up. As time goes on, though, David begins to realize that: 1) his own interests do not in fact always coincide with Max’s, 2)that therefore he must advocate for himself to achieve a favorable outcome, and 3) that he’s the one who has to decide just what outcome will best meet his needs. Much unlike most “kid movies,” this character shows real growth, and in the end confronts a real moral and personal dilemma. Whether you agree with his choice or not, you have to respect him for what he has become. 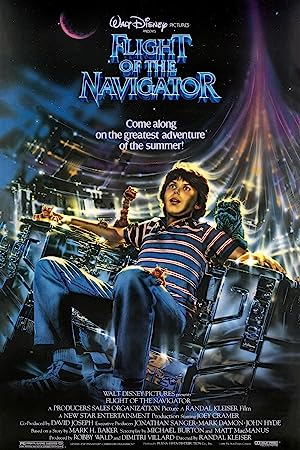