FBI agent Wesley Doyle is startled by the spontaneous declaration of youngster Fenton Meiks about how his father’s delusions to have a divine mission as avenging angel required him and his brother Adam to become his ‘demon-slaying’ murder accomplices. But when Doyle accepts to be shown concealed victim graves, the plot twists in the present just as gruesomely.

I first saw the trailer for Frailty on Yahoo Movies way back in the day, after hearing Stephen King praise it to high heaven. Not really a fan of either star, I still wanted to see it because I’m a huge thriller fan.

I was not disappointed. The acting was superb, especially from the two young boys. Usually I loathe child actors, but Young Adam and Young Fenton were excellent. Bill Paxton really did a good job of directing it too. It was beautifully shot.

One must also note the plot twists. The three twists at the end hit hard and fast, and I didn’t see them coming. The final twist of the film, coupled with the gravity of what had just been revealed, gives me chills to this day, even though I’ve re-watched the film so many times. 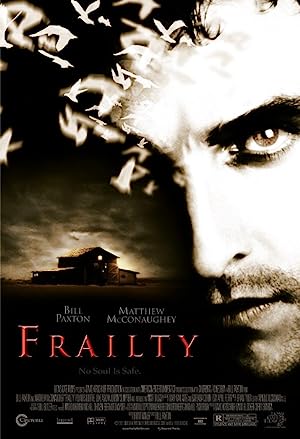 Be the first to review “Frailty 2001” Cancel reply