A remake of the 1985 original, teenager Charley Brewster (Yelchin) guesses that his new neighbor Jerry Dandrige (Farrell) is a vampire responsible for a string of recent deaths. When no one he knows believes him, he enlists Peter Vincent (Tennant), a self proclaimed vampire killer and Las Vegas magician, to help him take down Jerry.

At the time it came out, a remake of Fright Night seemed like one of those unnecessary movies – what was so wrong with the Tom Holland original, which gave us a subtle/over-the-top performance from Chris Sarandon and some cheeky humor from Roddy McDowell as a vampire named Jerry and the would-be ‘celebrity’ vampire hunter? Did it need an update? But upon the sudden and to put it mildly tragic death of Anton Yelchin, I thought it was certainly time to watch it. And among a cast that features really major talents like Colin Farrell, David Tennant and Toni Collette, Yelchin holds his own. More than that, he is necessary for the movie to work: he has to be believable as a young guy who starts off somewhat unsympathetic (trying to be ‘cool’ by ditching his nerdy friend for an attractive girl), and over the course of the story has to man up and not do what his dad did, which was ditch the family behind.

Yelchin plays the ‘straight man’ to a point where we can find him believable as being both completely scared and yet ballsy enough to go for what he has to go through to save and protect the ones he cares about – his mother and then, when she’s taken by this ‘Jerry’ fella, Amy – and it’s interesting to see this *after* Green Room, where he played a somewhat similar character though in a different setting (actually substitute Nazis for vampires and you got a somewhat similar premise, with Yelchin as the vulnerable but strong-willed and tough protagonist). If you’ve ever liked this actors work, this is a must-see of his.

Looking at 2011 Fright Night on its own terms, outside of viewing it as some kind of after the fact thing for Yelchin, it’s… good. Better than expected, really, as far as these kind of remakes can go (in other hands it could be easily disposable trash like Sorority Row or something). With Yelchin there as the main core for the audience to put their ‘what would I do if’ perspective on, Farrell and, in the second half of the film, Tennant get to have the time of their lives in these roles. Farrell is so evil he even eats an apple to show off how much of a nasty fella he is! Though it may not possibly require, shall one say, ‘range’, it takes real screen presence and a sense of menace, and I think Farrell makes this a memorable vampire as far as a) sex appeal (I mean, women and some men wouldn’t kick him out of bed), and b) when he gets nasty and violent, the threat feels real. For Tennant, it’s not a complicated character either – a fraud of a “vampire hunter” who is mostly for Las Vegas show – but he also gets to have fun in the role and can deliver exposition that is not in the least boring or distracting. And Toni Collette is… Toni Collette, good in all of her scenes. Even McLovin’ and Dave Franco give some good supporting turns, turning cliché parts into something with personality.

At any rate these characters are put into a setting that is rather novel: having it in/around Las Vegas makes it so that it’s believable that people would be out and about largely at night, being the primary time vampires get their food. I liked seeing that and that it was used to good effect. Where the movie loses me most is in certain parts of the execution of the action. I don’t know if it’s because I’m tired of wasteful or lackluster CGI, but any time Farrell or any of the other vampires “Fully turn” (which doesn’t seem to have a lot of logic, it only seems to occur when they’re extra mad) it looks really bad and fake, and a particular over the top car chase, which is attempted in part in one “long” take ala Spielberg’s War of the Worlds (no coincidence I think it’s a Dreamworks production, the setting and lack of/absentee father seem like Spielberg notes). Practical effects could have taken more time or been more intensive, but the results would last longer and not take one out of the movie like here.

If one can look at the substance of Fright Night it does work – the screenplay comes from Buffy the Vampire Slayer creative Marti Noxon, and the sense of whip-smart timing in the dialog and come-backs about how people look at vampires is especially funny, even from Peter Vincent most of all – and is a fitting tribute to the original. That film had a little more deadpan wit due to McDowell as Peter Vincent, though it too had some dated things as well (maybe in a cool way) like 80’s synth music. Will this hold up so well? I don’t know. But for what it is, it’s entertaining and successful for being bloody (it looks as if the blood is not all CGI which is good) and knowing of the genre (it’s self-conscious of vampire lore and movies, but it doesn’t wear you out on it like the other 2011 post-modern horror, Scre4m) 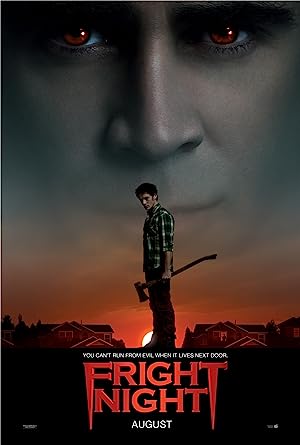 Be the first to review “Fright Night 2011” Cancel reply