Spring. Yorkshire. Isolated young sheep farmer Johnny Saxby numbs his daily frustrations with binge drinking and casual sex, until the arrival of a Romanian migrant worker Gheorghe, employed for the lambing season, ignites an intense relationship that sets Johnny on a new path.

After seeing this at the Galway Film Fleadh, I can honestly say that this film is a beautiful standout that deserves more than to be called the “British Brokeback Mountain”. While the comparisons between the two films were inevitable, God’s Own Country offers different things than Ang Lee’s classic. It speaks to more current issues of gay young men in a modern rural area, masterfully incorporating themes of identity issues, immigrant problems, and familial expectations. It’s not a remake of the classic, it’s an advancement of the genre that Brokeback Mountain helped define.

The most dazzling part of this film is the two young leads, Josh and Alec. It has been many, many years since I have seen a film where two individuals had as much chemistry between them, and the work that Josh and Alec put in to their character leaves the audience deeply and emotionally connected to both characters throughout the entirety of the movie. I could feel the lust between the two when they were on stage, and the heartbreak that happens when a fight occurs. The emotional performances by the two leads make the great movie even better.

Props must also be given to Francis Lee– as a first time director, this is not the movie we in the audience were expecting. It was as masterful, as poignant, and as beautiful as any established director could have done. It was an honor to watch this film, and I cannot wait to follow the career of the director– after what he did here, I know much more greatness is on the way.

I have not stopped thinking about this film for 3 days after I saw it. It won’t leave me for a long time, because there is so much to thing about and so much to celebrate. I cannot wait to see it again, and I encourage you to see it as soon as you possibly can- – this is what independent cinema can look like when done masterfully! 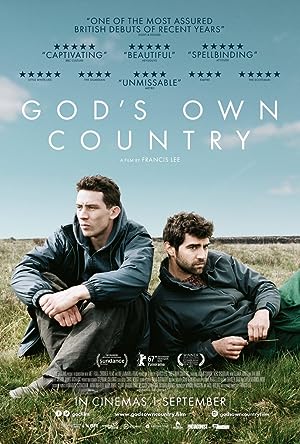 Be the first to review “Gods Own Country 2017” Cancel reply