Constructing this film through random scenes, director Harmony Korine abruptly jettisoned any sort of narrative plot, so here we go: Solomon and Tummler are two bored teenage boys who live in Xenia, Ohio. A few years ago, a tornado swept through it, destroying more than half the town and killing the same amount, including Solomon’s father. The film, from there, chronicles the anti-social adventures these two boys have. These include sniffing glue, killing cats, having sex, riding dirtbikes, listening to black metal, and meeting a cavalcade of quirky, bizarre, and scary people. These include a man who pimps his mentally ill wife to our anti-heroes, three sisters who play with their cat and practice becoming strippers, a black midget fending off the sexual advances of a troubled man (played by the director Harmony Korine), a 12-year-old gay transvestite who is also a cat killer, Solomon’s mother who seems to be the only glimpse of sanity, two foul-mouthed six-year olds, and most importantly, a nymphlike skateboarder who walks around town wearing pink rabbit ears.

Gummo is a film of substance, a rare thing in this time of Estee Lauder actresses and pec enhanced tree trunks stumbling around the kindergarten dialogue. Reality TV before it became anachronistic. A film that demands a second viewing to truly understand the director’s vision is a rare thing; my initial impression was of a mockery of Red Necked America, but now after several viewings I understand it as a celebration of the sidelined aspect of American culture. Unafraid to pull its punches, unafraid to deal with the shocking, the jarring, the discomforting; it is a film that is mostly about killing cats and sniffing glue. Possibly a freak show, but one done in the style of the old freak shows – the freaks call the shots and they revel in their opportunities. A piece best enjoyed at 5 am on a Sunday morning after burning the midnight oil, when your nerves are raw and you need something with bite to cut through the fog. Nobody has created such vivid set pieces and each time you review the film there is a new mullet to admire, a chair to be beaten, a Down’s Syndrome prostitute to mull over. Prepare to be shocked and provoked whilst being entertained; when the film finishes you are compelled to take stock of what you have seen and in my eyes that is what films are for. A hearty thumbs up. 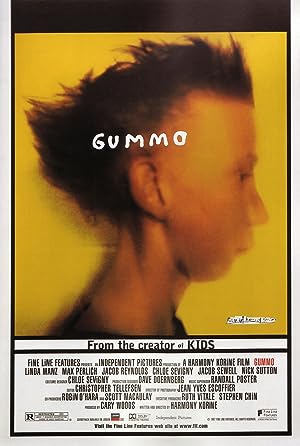