In the 1970s, a 12-year-old boy Esko lives in Tornio, northern Finland, a town bordering Sweden across the river. Esko befriends a Swedish boy, Pate, and learns to share his obsession for Harry Houdini, the legendary escape artist. While standing handcuffed on the railway bridge, contemplating a stunt jump into the icy river, he reminisces the dramatic events of the summer before. For the viewer, his problems are presented with warm humour # gang fights, feeling guilty for lying, Father losing his job, Mother losing her nerves, not to mention Grandfather having lost his willingness to speak since a traumatic war experience 30 years earlier.

This film is a top-quality coming-of-age comedy-drama from Finland. It is set in 1976 in the northern Finnish town of Tornio, on the Swedish border, and it is the story of 12-year-old Esko. He and his friends get into trouble following a run-in with some Swedish lads from across the river. When Esko refuses to accept his share of the responsibility, he is ostracized by the other Finnish boys. Desperate for companionship, he bonds with Patrick, a Swedish boy his own age who is also ostracized by his compatriots (for very different reasons). The two boys form a great admiration for Harry Houdini, and escapology becomes part of their play.

What is fascinating about the film is the contrast and tensions between the two cultures (who nevertheless live a short stroll apart). There is ritualized violence between the teens of the two adjoining communities, and this prejudice continues into the adults, as Patrick’s father forbids the lads to see each other (even though his runaway wife was Finnish). It is clear from the film that the Swedish town is the far more prosperous, so there are class distinctions involved as well. We also see a daily coping with the problems of two languages and cultures in a way that suggests it is a well-known routine to the local townsfolk: when one lad appears to be threatening suicide while masked, virtually the first question asked is whether he speaks Finnish or Swedish. Other similar details abound: Esko is once late for dinner because he forgot Sweden is in a different time zone; another time, the two boys are running down the street and shout “Nothing to declare” as they go by the customs post without breaking stride. One slight surprise in the film was the information that, apparently, schools in Finland play baseball…I never would have guessed that!

Aside from language, this would be a fine film for family viewing, and it was released for 7+ in Finland (it would rate an American “R” for the language in the subtitles). 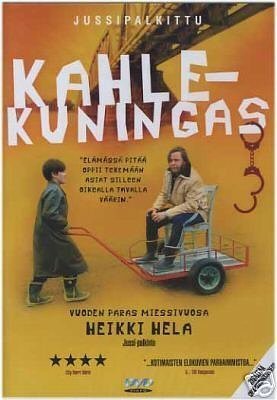