This movie is based on a contemporary children’s book, not the usual Grimm Brothers stock. Hans Röckle is a puppeteer, inventor, blacksmith and more. He is challenged by the Devil (in almost a dozen fancy costumes) who offers him even more inventiveness, against his soul should he ever make money with an invention, build something twice, or cease inventing for 7*7 hours.

The inventions help his fellow men: an automatic sewing kit (fancy animation), a weather-controlling flute. However, the contract with the devil had a clause that the devil can take any invention as plaything for his mother. But even without devil’s intervention, the things often have less than desirable effects on people’s lives. Roeckle has seen the country of “Tomorrow & Aftertomorrow” in a magic telescope, where poverty and illness are overcome, somehow a communist paradise… so he brings his inventions there, with his amazing Time Boots. 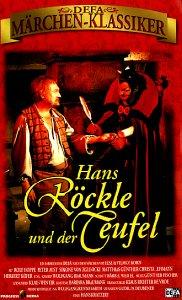