A punk infused love story of two street skaters, August and Beto, and their last day on earth: they’re gonna end it.

Two guys lost in this world make a pact to end their lives together. Neither of these skateboard dudes has much of a future, their daily lives are directionless and purposeless. Better to find another life through death.

Some reviews have stated these two guys, Beto and August, are lovers. I think not! This story is all about loyalty, allegiance, and commitment. At the start of this movie you hear Beto and August making a pact of ending their lives together. So these two spend their day in self indulgence, visiting friends and family, and just having fun and some of this fun comes at the expense of others. You find out pretty fast why August is so lost in life. For Beto it’s more complex.

Director/writer: Henry Alberto has created a near perfect film! Hara Kiri offers much to think about and contemplate about how some face life and their often irrational acts. August and Beto are not uneducated bums, this is proved with the scene on the rocks writing quotes with sharpie pens! We are left to never know exactly why these two have chosen to end their lives. The near ending of the story is smartly done because you just aren’t sure what is about to happen with Beto.

This is a first class indie! 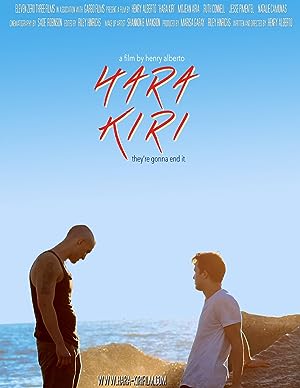