Michael John LaChiusa’s musical Hello Again first came to Off-Broadway in 1993. Lachiusa’s work is inspired by Arthur Schnitzer’s play La Ronde from 1897, which examines five couples — chambermaids, students, prostitutes and noblemen — in 19th Century Vienna. The play is about human connection and sex, although the act itself is never shown. Indeed, in Schnitzer’s script sex was referred to as “XXX,” and it is left up to one’s imagination if those letters are supposed to represent sexual explicitness, a series of tender kisses, or perhaps both. The story has an engaging hook — a linked series of lovers, with one actor appearing in two roles, joining the players into a chain. The musical, brought to the screen by Mr. LaChiusa and director Tom Gustafson and screenwriter Cory Krueckeberg, does have some things going for it. The film has a lush, inviting look — one is tempted to stretch out one character’s futon or across the red elevator walls in one character’s building and be swept away along with the lovers. In a film with these dual roles, the film nicely folds over on itself in places. One actor sliding on his shorts blends seamlessly with the same actor sliding on shorts decades later. A young man shyly tries on a bracelet during the Titanic’s maiden voyage of 1912; that bracelet turns up on the wrist of the same actor in a New York disco in 1976.

One thing that doesn’t work, alas, is the music. Most of it just isn’t very memorable, although some of it does work. The film’s best song and pairing comes near the end. It features Audra MacDonald as “Sally,” who is trying to seduce her lover, a senator named Ruth, played by Martha Plimpton. The decision to cast these two women opposite each other was inspired, for there is a wonderful contrast between the warmth of MacDonald and the coiled steel of Plimpton. Most of the characters in this musical are little more than types, but these two women feel alive. How did these women meet? What are their lives like, apart and together? What do they want? MacDonald, a Broadway star, answers this question when she sings her way through a quite fun musical number “Mistress of the Senator.”

The pairing of Cheyenne Jackson and Tyler Blackburn also works well. Jackson plays Robert, a writer who picks up Tyler Blackburn’s Jack in a New York disco in 1976. The couple manages to generate some heat — I dare say a look from Mr. Jackson could spark even the soggiest of kindling. The score works reasonably well here, moving from a rock feeling at the start, as desire has been sparked, to something sweeter, when the couple entertains the idea that maybe, just maybe, this one night stand might go somewhere.

So, Hello Again is a good movie but a frustrating one. I found myself delighted at times, but also seeing the missed opportunities. Of course, this is how love works for some of us — if we are lucky enough to find it in the first place. 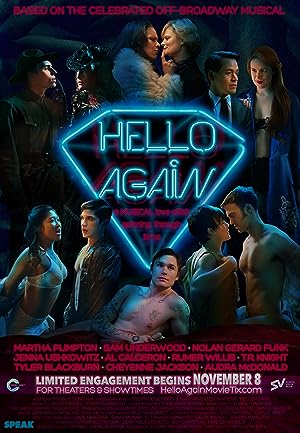 Be the first to review “Hello Again 2017” Cancel reply