A boy comes of age during a summer he spends in Cape Cod.

Daniel is bright but probably not given enough work to keep him interested in school. Summer’s about to start and his mother decides to send him to live with her sister on the coast. He falls in with a crowd that isn’t that ambitious and decides to raise the level of play, so to speak.

Tim Chalamet as Daniel brings a sweetness and innocence to the story that makes it very believable. Daniel has no idea what he’s gotten himself into and how very nasty that world can be. A girl who would normally be out of his league flirts with him as a joke, which he takes seriously having no real social experiences, and this leads to more trouble.

It’s good to know, and hard to learn, what parts of life can be taken lightly and when things need to be taken seriously. 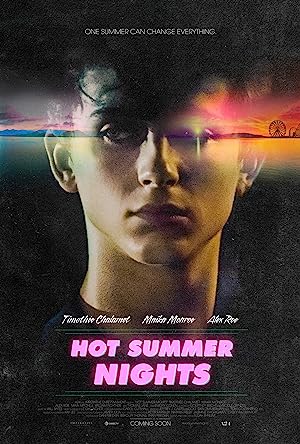 Hot Summer Nights (2017)
107 min|Comedy, Crime, Drama, Romance|27 Jul 2018
6.4Rating: 6.4 / 10 from 7,369 users
Circa 1980s, a sheltered teenage boy comes of age during a wild summer he spends in Cape Cod getting rich from selling pot to gangsters, falling in love for the first time, partying and eventually realizing that he is in over his head.
Director: Elijah Bynum
Creator: Elijah Bynum
Actors: Timothée Chalamet, Maika Monroe, Alex Roe, Emory Cohen

Be the first to review “Hot Summer Nights 2017” Cancel reply