Taking place in the 1990’s, Huck and his card shark friend, Jim, travel from California to Nevada searching for Huck’s long-lost grandpa. Along the way, a deceived card player chases the two across the states with his two, less intelligent, sidekicks.

Budding fisherman and boy mechanic Chauncey Leopardi (as Billy “Huck” Thomas) leaves his Hannibal, Missouri home to escape an abusive home life and find his grandfather (who’ll be played by John Astin). In the city of Los Angeles, young Leopardi hooks up with card shark and con man Graham Greene (as Jim), a Native American “Indian” on the run. Adventures bring the duo to neon-lit Las Vegas…

This “modern” adaptation of the original story by Samuel Clemens (as Mark Twain) is most interesting in that writer Christopher Sturgeon knows what will work, and avoids making mistakes. There is no attempt to strain characters or situations that would not fit. This motion picture version does not succeed in the original’s artistic appeal to all ages and generations, but that lofty goal is seldom reached…

There are subtly sexualized symbolic moments, and a not-so-subtle romantic kiss should be noted (it occurs between the boy and a young woman). Also note, a level of violence which could be described as cartoon-like is ever present. Still, this is a film for pre-teens, mostly, and the same elements of danger and attraction were evocations used successfully by Twain. He’s handy with the fishing pole. 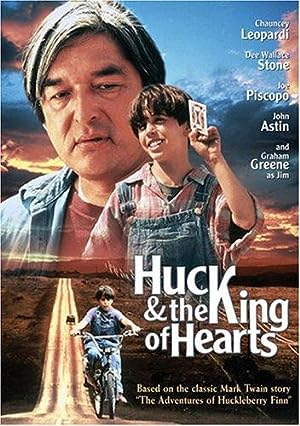