Taavi, who never goes anywhere without his video camera, and his young and wealthy friends find themselves on the cusp of adulthood. After throwing a wild party at the mansion left to him by his deceased parents, Taavi shoots video of the partygoers in their various states of undress and drunken sexual congress. What begins as a prank spurs Taavi and his friends Jere, Sami, and Markus to form a club, the only requirement for admission being that each young man must bring a tape of his latest sexual conquest to every club meeting. The risque game quickly degenerates into dangerous compulsion as relationships implode and the boys forsake their girlfriends in favor of prostitutes and “swingers”. As currents of coercion and abuse enter the picture, each young man must ultimately confront his own morality in the viewfinder

“Young Gods” is the ironically-titled film that examines the vapid world of mesmerizing images we live in, when there’s no guidance for spiritual context. We experience this confusion through the eyes (and lenses) of four Finnish boys, all recent high-school graduates. Taavi has just inherited his deceased father’s mansion and wealth, but has blocked out the memory of his death, and moves through life at a distance, viewing everything possible through his camcorder’s viewfinder. Jere is emotionally dead. He has a girlfriend and finds comfort in sex, but is unable to open his heart. Sami, homely and overweight, has zero self-esteem. Markus is very immature, but otherwise fairly well-adjusted.

The four make an odd pact to film their sexual conquests, and the four find themselves living in an even more illusory meta-world, as their desire to film sex takes precedence over their actual desires, and recording an event becomes secondary to experiencing life. They all seem to lack a father who can teach them about love and loving, and are left to float down a river of sex and imagery without a clue to its purpose. (Jere’s father is no help: he’s a pornographer, coolly composing loveless sex scenes as though creating a grocery display.) Slowly, the consequences of their pact begin changing them as it brings out the yearning, emptiness, violence, or love that is really within their hearts. 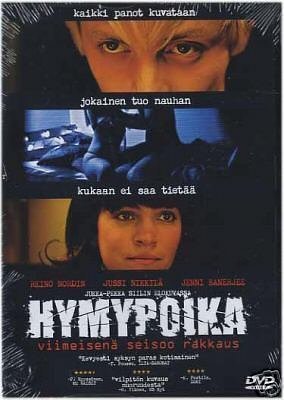 3 reviews for Hymypoika 2003 with English Subtitles