In the heat of the summer, a lonesome house in the countryside between woods and corn fields, lives nine-year-old twin brothers who are waiting for their mother. When she comes home, bandaged after cosmetic surgery, nothing is like before. The children start to doubt that this woman is actually their mother. It emerges an existential struggle for identity and fundamental trust.

Goodnight Mommy takes more than it should to find its rhythm, but it eventually gains energy and becomes a very interesting psychological thriller. It’s difficult to write a review of this film without revealing the disturbing events from its third act, so it will be better to be mentioning what does NOT happen. Even though Goodnight Mommy was widely acclaimed in websites dedicated to horror cinema, it isn’t a typical supernatural tale or a gore spectacle (even though it can be said that there are slight traces of both styles); and the twist in the end is quite well implemented, and I had never seen it coming. The actors make an extraordinary work in their roles, revealing the complex relationship between their characters without too much words. The story is set at a cottage inhabited by three persons (well, there is some occasional “guest”, but they are just auxiliaries of the plot who don’t require too much definition). That minimalistic cast defines the general tone of the movie, shot with an elegant austerity (which is typical of European cinema) which is also reflected on the terse dialogs and cold cinematography, portraying the games of the kids and the moments of the ending with the same indifference. On the negative side, the screenplay takes more than it should to find its own rhythm, as I previously mentioned. On the one hand, that increments the suspense; but on the other hand, it occasionally leaves us on an emotional drift, without enough clues to draw conclusions or enough events to impulse the narrative. Fortunately, the many pros of Goodnight Mommy end up compensating that complaint on a big degree, and I recommend it as quite a solid film, which might be horror, thriller or drama; but its analysis of psychological traumas and family dissolution doesn’t need to engage with a specific genre in order to leave the spectator satisfied. 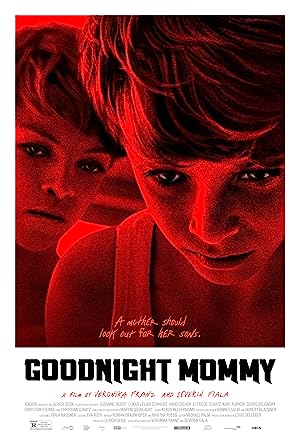