This was the penultimate film of the great Italian director Pier Paolo Pasolini. It also concludes his “Trilogy of Life”, based on medieval story collections (the others are “The Decameron” and “The Canterbury Tales”). Like the others in the series, this is a portmanteau film (i.e. the film is not just one story but several).

The film begins with a young man’s search for his slave girl lover, who has been abducted. Along the way, several stories from “The Arabian Nights” are told.

The film has a very loose structure. There are stories, within stories, within stories. This can be quite confusing at times. It was filmed in Iran, Yemen and Nepal and the countries look absolutely spectacular. The main flaw of the film is that it does show signs of being hastily cut (Pasolini himself reduced the film by half an hour before general release, and there may have been cuts due to the censors). This often makes the film seem quite disjointed. One of the dominant themes in this film is love and sex, and yes, there is a lot of explicit nudity here.

The film touches on dreams, reality, deception, truth, freedom and slavery. While by no means perfect, there are times when the Pasolini’s genius and humanity shines through. 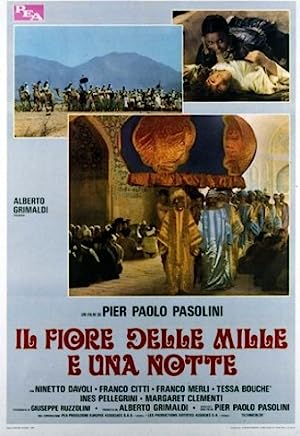 Arabian Nights (1974)
130 min|Comedy, Drama, Fantasy, History, Romance|20 Jun 1974
6.8Rating: 6.8 / 10 from 6,204 users
Ancient Arabia. A youth is chosen by a beautiful slave girl to be her new master; she is kidnapped and they must search for each other. Stories are told within stories; love, travel and the whims of destiny.
Director: Pier Paolo Pasolini
Creator: Pier Paolo Pasolini, Dacia Maraini (script collaboration)
Actors: Ninetto Davoli, Franco Citti, Franco Merli, Tessa Bouché