Florentine is a young, beautiful and passionate woman with a desire for love. Feeling abandoned by her husband’s impotency, she searches for outside affection and seduction within brief, but often passionate encounters. During this web of desire she encounters Dorothy. Unknown to Florentine she is her husband’s accomplice. In this twisted, frenzied fantasy her husband Jake becomes excited and aroused by the seduction of his wife. With his secret darkrooms and two-way mirrors he begins to desire his wife once more. Florentine, with the help of their adopted son, discovers his world of distorted fantasy. Amazed, but realising that Jake still loves her, she must act.

This film is based on a story, by Guy de Maupassant, telling of a love gone cold. Florentine (Malu) believes that her husband Jake no longer loves her and so she seeks affection from secret affairs, both male and female. When she meets Dorothy she thinks she has found real love but unbeknownst to her, it is all a set-up. She is secretly being spied on by Jake. When Florentine discovers this, she realises that there is a way to win Jake back.

It seems the way of things in films that older men marry younger women and then find that they cannot do their husbandly duties. In this one, the husband can only get turned on by watching other men with his wife. Not only that, but it has got to be with lots of disco lighting. Quite what Guy De Maupassant would have made of that is a moot point. The sex scenes look rather tame considering that the director, Pasquale Fanetti has made stronger stuff. Perhaps there is a longer version out there. This UK DVD runs to only 80 minutes. This is not a film worth repeated viewing. 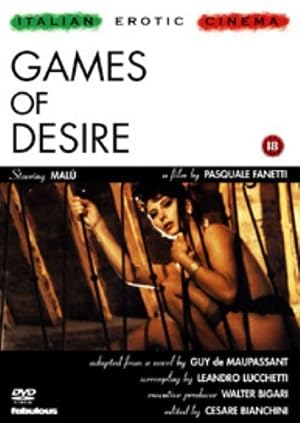 2 reviews for Impudicizia 1991 with English Subtitles