In New York, the boy Cameron lives with his Dutch mother Lindsey that is divorced from his alcoholic father Dan. One night, Cameron overhears a noise in the kitchen and is attacked by a homeless; however he kills the man, breaking his neck. The Vatican representative Camilla summons the scientist Dr. Ember to help the boy that is possessed and the exorcism is not effective. Dr. Ember has the ability to enter in the mind of people possessed by demons and bring them back to reality in a dangerous procedure with the support of his team composed by Oliver and Riley. When Dr. Ember visits Cameron, he realizes that the boy is possessed by the insidious demon Maggie, who killed his wife and son in a car accident. Will Dr. Ember succeed in destroying Maggie and saving Cameron?

The movie takes some getting use to as it’s a little off on genres.

Not a typical ghost story, Aaron Eckhart plays a doctor Who takes a very non religious method in exercising demons by using a gift he has to enter the minds of those “infected” by supernatural parasites and evicting as he calls it, the spirit by making its host realize that the perfect world the demon has created in its dreams is not real.

I was kinda expecting more of a horror movie theme but it’s not that. that’s what is a little off. It’s not scary and it’s not trying to scare you (At least I think, cause if it is it does do a bad job of it). It feels more like it’s exploring or expanding the concept of a religious-less exercisium with a little background story to keep it interesting and keep it moving.

But it’s a good movie to watch. 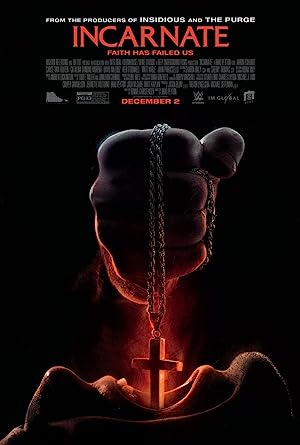 Incarnate (2016)
91 min|Drama, Fantasy, Horror, Mystery, Sci-Fi, Thriller|02 Dec 2016
5.3Rating: 5.3 / 10 from 10,135 users
A scientist with the ability to enter the subconscious minds of the possessed must save a young boy from the grips of a demon with powers never seen before, while facing the horrors of his past.
Director: Brad Peyton
Creator: Ronnie Christensen
Actors: Aaron Eckhart, Carice van Houten, Catalina Sandino Moreno, David Mazouz

Be the first to review “Incarnate 2016” Cancel reply