A series of vignettes involving memories of companionship and sexual awakening shared by two second cousins.

Every now and then a one-of-a-kind film comes along which breaks the mould.

This is such a film. And frankly since I am adding this review several years after the release, I will confess I enjoyed the handful of reviews already left here on the IMDb because the writers clearly tried to impart the joy they felt while viewing. That too is rare.

My only quibble is with the earlier comment that this is “not” an experimental film.

That may be under-stating the obvious.

Up until Jess + Moss, in spite of my many reviews on the IMDb, I was not convinced it was even possible to create a film which is more visual montage (like a scrapbook) than linear narrative, and still have it connect with the viewer.

This film proves I was wrong. I remember years ago Hollywood took a Stephen King tale (with the typical King complex narrative) and struggled mightily to achieve the same light tone, the same joie de vivre, the same re-imagining of what it is like to be a child on the verge of adulthood.

Hollywood did succeed nicely. This film, however, aces it. 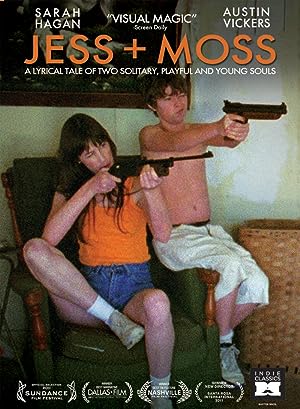