Smith’s everyday life in the dorm – hanging out with his arty, sarcastic best friend Stella, hooking up with a beautiful free spirit named London, lusting for his gorgeous but dim surfer roommate Thor – all gets turned upside-down after one fateful, terrifying night.

That’s how ‘Kaboom’ is billed on the DVD. I watched it, premiered on Film 4 last night.

Initially I rather liked it, the striking design, the casual attitudes to almost everything and the dialogue. Especially the catty one-liners. I’m not familiar with this director and on the strength of this one movie, I’m not in a particular hurry to explore further, however.

I realise that it’s intended to be a surreal cult film and where it falls to pieces is where it starts to mess with your head, as it’s just non-sensical and frankly, silly. I also realise that I’m not in the probable intended audience, age-wise. People running around in pig- headed masks just don’t grab me, I’m afraid.

The liberal, mixed sex scenes were both interesting and fun and the attitude that good sex is just that, refreshing. Most of the young cast play their parts well, especially Thomas Dekker, Haley Bennett and Juno Temple. I did watch it all and there were many good points and I enjoyed much of it, but ultimately, it’s just too way out there. 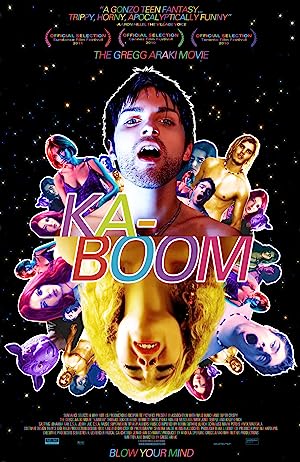 Be the first to review “Kaboom 2010” Cancel reply