It’s 1998 and New York City is in a state of intense flux when documentary filmmaker Erik Rothman (Thure Lindhardt) first meets Paul Lucy (Zachary Booth), a handsome but closeted lawyer in the publishing field. What begins as a highly charged first encounter soon becomes something much more, and a relationship quickly develops. As the two men start building a home and life together, each continues to privately battle their own compulsions and addictions. A film about sex, friendship, intimacy and most of all, love, Keep the Lights On takes an honest look at the nature of relationships in our times.

What a trip this flick is!

Director/writer: Ira Sachs really brings to the screen a story about obsession and pernicious behavior between the emotionally needy Erik and the psychologically baleful Paul. In this story you will go through three stages in what you think of Erik – impatience, because Erik can’t see the obvious before him with Paul, – sympathy, because Erik is obsessed with Paul and Erik is truly a nice guy while Paul is nefarious, – relief, when Erik finally get beyond his hang-up with Paul.

This movie is all about Erik! You the viewer are taken through about eight years in Eriks life and his undefinable infatuation with Paul. We are never shown why Erik cannot break free of his emotional need for Paul and Erik is lost without him. But Paul, on the other hand, can live his self loathing life perfectly well without Erik. So I believe Mr. Sachs is asking us which character is the more needy of the two. Erik because he is empty without Paul or Paul because he needs his drug habit and to hurt those who care for him.

Whatever! This is quite a good film if you concentrate on Erik due to the fact he is the central figure and we see his life only. The story opens and closes about him. 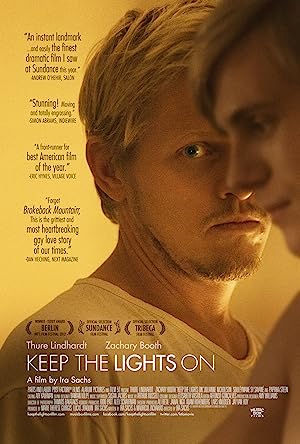 Keep the Lights On (2012)
101 min|Drama, Romance|27 Jul 2012
6.3Rating: 6.3 / 10 from 4,968 users
In Manhattan, film-maker Erik bonds with closeted lawyer Paul after a fling. As their relationship becomes one fueled by highs, lows, and dysfunctional patterns, Erik struggles to negotiate his own boundaries while being true to himself.
Director: Ira Sachs
Creator: Ira Sachs, Mauricio Zacharias
Actors: Thure Lindhardt, Zachary Booth, Marilyn Neimark, Paprika Steen