Mary-Jane asks, “Do all women fall in love with a boy, or just those without sons?” She’s divorced with two daughters, Lucy and Loulou. Lucy has a party where Mary-Jane notices Julien, 14, small and brassy, but she sees a sensitive side. She contrives to spend time with him and lets him know she’s available to him. He’s on the cusp between child and man, alternating between playing a video game, Kung Fu Master, where he tries to rescue Sylvie, and joining friends in bluff talk about sexual exploits. As Lucy realizes what is happening, she’s repulsed, but Mary-Jane, encouraged by her own mother, carries on. Is it love or jealousy of lost youth? Is there any way this can end well?

The story here is about a woman falling for the 14 year old classmate of her daughter’s, but forget about the story now, it’s not a prurient film of course and seeing just a ‘social issue’ movie would miss the whole point. This is a small exercise on context by Varda but as astute as ever.

Varda seems to be parodying the notion that her film would have just a social relevance by having the AIDS scare of the time so prevalent throughout – the film is from the late 80s, it evokes a distinct air of the time when youths crowded arcade parlors and TV segments on HIV sounded doom for mankind – or preempts it, perhaps unsure herself if it’s not unavoidably going to be that in the end.

But see something else, about the narrative horizon in which things acquire their significance.

The woman who simply has these feelings one day that threaten to bring down everything, in context of what she experiences, it’s a real affection for the boy, it shakes her in earnest. The boy who acts all grownup around her, bringing her flowers like a man would, later in a hotel plans to seduce her, but Varda has specifically taken care to show that he becomes just a kid with his peers or always off to a video game.

The film’s title comes from a video game that he plays in the arcade parlor, in the game’s nested story-within a hero fights monsters to make it all the way to the top level so he can set free a princess kept prisoner. This is of course a deliberate confluence by Varda. We’d like to think of love in this way, as something that frees us, but what if it’s sometimes fiction? Meaning, the woman is simply not mindful that the boy inhabits a wholly different context than hers, simply playing a game of love.

And this is what Varda marvelously depicts later in a scene where the kids are goofing with Nazi paraphernalia in a room. A parent who walked in and thought the kids have strayed into budding Nazism would have only been misled by appearances, inhabiting a horizon in which objects (Nazi stuff) are charged with their narrative significance. But as the scene plays out Varda shows that it’s evidently just another game for them.

This is the exercise, on how phenomena give rise to illusory narrative, on how illusory narrative traps us in illusory significance, chimeras of our desires. It isn’t about nostalgia or passionate love. Love doesn’t equal truth, unless it’s shared in truth. This was a point made in Le Bonheur. In my ongoing project I’m after filmmakers who abet mindfulness, the wisdom that comes from it, and Varda has this. 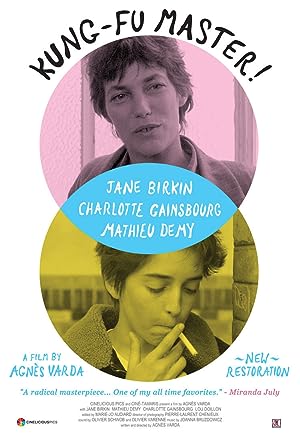