Two brothers, aged 16 and 18, are in rural France with their father. They are in hiding and forever changing dwellings so their whereabouts remain unknown to the authorities. At one of their stops the older brother abandons them and so, 16 year old Sylvain is left alone with his father, by the Loire river. Thatʼs where he will meet his first girlfriend and will begin to consider leaving his father for the first time, in order to live his own life.

A father defying a court order has taken his two sons on the run, living out of a couple of caravans in the Loire valley. An early and revealing moment has him slap a cigarette out of the mouth of the 17 year old and tell him “no service comes without a tree dies or a man toils.” The kids are feeling the isolation and take the horse into town, bringing the locals out in pursuit and starting the trio on the run again. Dad and the younger boy escape in a moored river punt (a bit of Huck Finn here) and the kid encounters a bikini girl angler, eventually facing him with a choice – at a cross roads yet.

Strong Performances, nice conflict of lyrical setting and hostile events and issues that we haven’t seen in a movie before. Sympathy swinging between the parents is something new.

More subtle and probably better than the similar U.S. RUNNING ON EMPTY. 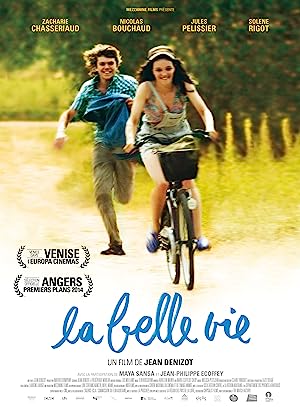 The Good Life (2013)
93 min|Adventure, Drama, Romance|09 Apr 2014
6.8Rating: 6.8 / 10 from 179 users
Yves is living in hiding with his sons, Sylvain and Pierre. Two years before, he had abducted them from their mother after a judge ruled against him. But the boys are growing up now, and …
Director: Jean Denizot
Creator: Jean Denizot (scenario), Frédérique Moreau (scenario), Catherine Paillé (collaboration)
Actors: Zacharie Chasseriaud, Nicolas Bouchaud, Jules Pélissier, Solène Rigot