Amid the responsibility of taking care of her brother, who is in vegetative state, financial problems and the awaking of her sexuality Florencia becomes obsessed with the comic “The Plants”, which is about the invasion of plant souls to human bodies during full moon.

A potent, obliquely told coming-of-age movie that fuses pop culture, coma, teen sexuality and plant life into a dark, troubling whole, Chilean Roberto Doveris’ debut is called The Plants. Held together by a low-key central performance by Argentine singer Violeta Castillo, also debuting, The Plants is more memorable for its swoony, dreamy atmospherics than for ideas that are forced and abstract to the point of meaninglessness, but several high-risk sequences, the continuous, underlying throb of sexual tension and a canny way with visually evoking states of mind suggest that Doveris, as evidenced by his inclusion in Berlin’s Generation 14plus sidebar, is one to watch.

The script is very slow in getting things into place, the pace leisurely throughout: This one is about mood more than movement. The family of 17 year-old Flor (Castillo) seems blighted by misfortune: her father’s abroad, her mother Julia (Ingrid Isensee) is very ill in hospital, and her brother Sebastian (Mauro Vaca) is brain-damaged and comatose, thus connecting him in Flor’s mind with the plants of the title. When Sebastian’s helper Clara (Marcela de la Carrera) has to leave, Florencia is left to look after him alone, though sometimes in the company of her buddies and dance trio partners Raul (Juan Cano) and Fran (Simon Mercado).

At 17, it’s probably not good to spend your evenings in the arms of your brain-damaged brother. Flor starts to explore the Internet’s sexy side, and before long she’s invited comic shop owner/Internet exhibitionist Rodrigo (Cristobal Lecaros) to her home. In skillfully managed, visually explicit scenes of great sexual tension, she stands on one side of a locked door while the hapless, desperate Rodrigo stands on the other, penis in hand, as Flor exercises her sexual power for the first time. The question, answered though the film’s extended final sequence, is: Will Flor let the right one in?

What is already a dark little tale of badly channeled teen sexuality is further darkened by Flor’s interest in an old series of comic books about plants that fuse with humans at night in order to satisfy their dark, plantish desires. In other words, the comic book stories seem to be Flor’s way of identifying and communicating with her brother, and there’s probably also some comment in there about how men are driven by their sexual instincts, so that the plants are, in fact, the characters.

It’s all a bit tangled, and as a message, it doesn’t add up to much — but it does make for some fascinating visuals, as from time to time the camera sweeps up and away from the confines of the Flor’s apartment to take in the tangles of branches, silhouetted against a blue night sky. Doveris and DP Patricio Alfaro do have a way with a slowly panning camera, and one dream sequence in particular, involving a long, slow-tracking shot, is effective and memorable. Likewise, in one scene drawn pencil lines appear on the screen outlining people’s faces and bodies, suggesting that to Flor, other people are comic book characters — a daring, confident flourish by Doveris in a film full of such stylistic gestures.

This is Flor’s film, and effectively The Plants — with its dark hues, its multiple thriller and horror tropes in the form of stormy weather, banging doors and one really effective in-bed jump scare worthy of a straight horror — is a portrait of Flor’s alienated state of mind. The introverted, timid Flor has no female friends at all, and her relationship with those around her, whom she sees as aliens, is continually wary and uneasy, scared of commitment and voyeuristic rather than engaged. Castillo (who also wrote the rasping, quietly agitated score) transmits all this through a low-key, under-acted performance which, although always authentic, is rarely interestingly played, with actress and director alike seemingly happy to have her carried along by the film’s dark and dreamy mood. But then how do you make a plant dramatically interesting? 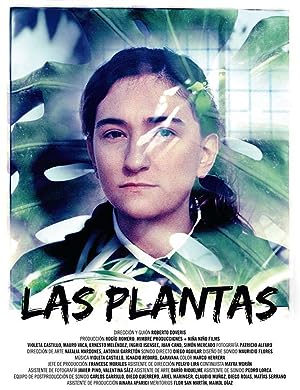 Las Plantas (2015)
90 min|Drama|20 Oct 2016
5.4Rating: 5.4 / 10 from 77 users
Amid the responsibility of taking care of her brother, who is in vegetative state, financial problems and the awaking of her sexuality Florencia becomes obsessed with the comic "The Plants"…
Director: Roberto Doveris
Actors: Violeta Castillo, Mauricio Vaca, Ernesto Meléndez, Ingrid Isensee

Be the first to review “Las Plantas 2015” Cancel reply