THIS SPECIAL FRIENDSHIP tells of the tender relationship between a twelve-year-old boy and the upperclassman who is the object of his desire. All set in the rigid atmosphere of a Jesuit run school.

French cinema has always been, if not the most profound and analytic in the world, indeed, the one that sets the benchmark. In this beautifully shot film, Delanoy tackles a difficult subject matter (for our days) that wasn’t so then. When I saw Les Amities Particulieres for the first time, I simply couldn’t realise how important it was. Now, after many years, I find it much more interesting than it would have been in the sixties. Many others have already written about the story. I will delve into a different approach: today’s reality, at the beginning of the 21st Century.

The strength of our mediated world has increased exponentially and it will keep on growing. The way we look at our world today is consistently chiseled by the way information is provided, dissected, manipulated and delivered. We just consume it. With it, the apocalyptic view on pedophilia that, by the way, means affinity, love, for boys has been transformed completely.

Maybe we’re more than insane today than in the 40’s or the 70’s, but by then people were not scared at all by this kind of love, even when it was clearly seen as sin if sexuality was involved. For us, pedophile means stalker, assassin, assailant, or, as the media loves to call them: molester.

It’s a good idea to watch this film with an open mind. What happens has happened for centuries and will happen ever after, until the human race disappears. May this words imply that I defend pedophiles? Yes. I can’t defend a criminal, but I can defend someone who loves another human being and is loved in response. Georges loves Alexandre and Alexandre is absolutely in love with him, despite the age gap (at that age, the gap is even more pronounced). Alexandre makes Georges swear his love for ever, his “special friendship”, and writes him touching letters that only lovers can write. They simply can’t help not loving each other, despite of the many obstacles in their way.

In today’s perspective, Georges is a pedophile, a stalker, a child molester who would never, ever molest a child… a stalker that is stalked by his prey because… he loves him. This bond grows so strong that is shared with close friends that encourage this relationship.

What would the media say about something like this TODAY???? We all know the answer.

This film can teach, too, a lot in cinematographic techniques. The use of the camera is unusual for its time. Maybe one of the most daring movements is when Georges arrives in one of the first scenes of the film. The unique way of depicting the corridors in the cloister is another “first”, when the steadycam wasn’t even in a dream.

And, story-wise, we have to credit this film with one of the most powerful endings in cinema: after the “Fin” frames we discover the very last testament of Georges unread letter to Alexandre, which ends with the word “amour”. All in all, a must-see.

If you want to consider further what I said before (I know it will be hard for many people to swallow) I recommend watching “Wild Tigers I Have Known”, a 2006 film made by Cam Archer, 26. It draws a similar scenario assuming life as it is now. I caution you that this film is very experimental (underline very), so it may be confusing and without a clear conclusion. That, is yours to make. 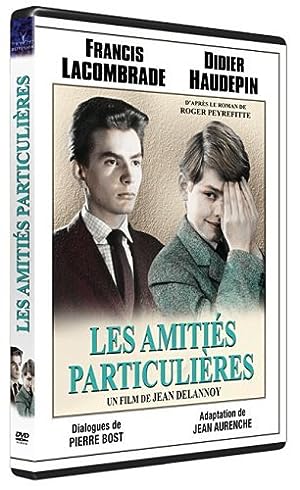 This Special Friendship (1964)
99 min|Drama|04 Sep 1964
7.6Rating: 7.6 / 10 from 2,307 users
THIS SPECIAL FRIENDSHIP tells of the tender relationship between a twelve-year-old boy and the upperclass man who is the object of his desire. All set in the rigid atmosphere of a …
Director: Jean Delannoy
Creator: Jean Aurenche, Pierre Bost (dialogue), Roger Peyrefitte (novel)
Actors: Francis Lacombrade, Didier Haudepin, François Leccia, Dominique Maurin