A young runaway rejects society’s condemnation and dares to fulfill his dreams. France, 1930s. 14-year-old orphan Yves Tréguier sees the world through the bars of “educational homes” where he is raised in conditions worthy of a penal colony, and dreams of a dramatic escape across the ocean to New York.

In 1932, In France, the fourteen year-old runaway orphan Yves Tréguier (Emile Berling) is sent to a reformatory after several attempts to travel to New York as stowaway in a ship. In the environment of prison, Tréguier is protected by the aspirant mechanic Blondeau (Guillaume Gouix) against the bully rascal Molina (Anthony Decadi) and befriends the upper-class teenager Marcel “Fil de fer” Morand (Julien Bouanich) that was sent to the institution by his stepfather and misses his mother (Carole Bouquet) and his piano. Tréquier unsuccessfully tries to escape from the brutal reform school and invites Blondeau to go with him, but the youngster has the promise of a job of mechanic for the next year and prefers to stay in the reformatory. However, Marcel is incapable to support the life conditions far from his beloved mother and commits suicide triggering a series of events that will force Blondeau to join Tréquier in his dream.

“Les Hautes Murs” is a drama based on a true story of French writer Auguste Le Breton, the pseudonym adopted by Yves Tréguier. The life conditions and brutality of the guards in this “education center” is impressive and the place is actually a school of crime, corruption and perverted sex. I love the speech of Fil de fer in the refectory when he says that children are not born to be criminal. In accordance with the information in the end of the film, this type of reformatory in France was shutdown only in 1979. The performances and the direction are top- notch. My vote is seven. 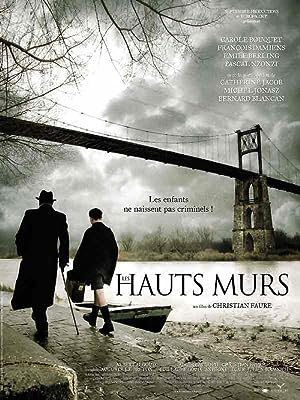