A young boy fighting cancer writes letters to God, touching lives in his neighborhood and community and inspiring hope among everyone he comes in contact. An unsuspecting substitute postman, with a troubled life of his own, becomes entangled in the boy’s journey and his family by reading the letters. They inspire him to seek a better life for himself and his own son he’s lost through his alcohol addiction.

I feel sad for this guy, Abdullah_Fritzi from Suadi Arabia. Seriously,the name of the movie tells you it’s probably about God, and because it was filmed/produced in the US, it’s about our God, not yours Abdullah. I have deployed to the middle east 2 times, of course you would want it banned because you don’t understand or enjoy freedom of religion.

This is a great movie about the trials and tribulations of dealing with cancer and death and our struggle as humans on the topic of a higher power. Movies about God are not for everybody. If religion turns you off, then watch something else. 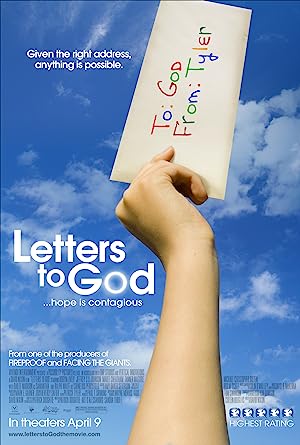 Be the first to review “Letters to God 2010” Cancel reply