I watched this film a week ago and after the last shot I realized that I wanted to watch it again. That very moment! From the very beginning! I read in someone’s article the word “haunting” about this film – I absolutely agree with it. It’s an elegantly made film with fascinating actors. The enchanting guitar, violin and piano just intensify the heady mood of it. The actors’ way of speaking (described as “terrible accents” in someone’s comment) didn’t bother me at all, maybe because neither English nor Spanish are my first languages. But I agree with Dromerito2003 that it would’ve been more believable if all of them spoke Spanish (Robert Pattinson definitely has “language ear” and it wouldn’t be difficult for him to speak Spanish only, I think). With subtitles. By the way now I’d like to learn Spanish to read Lorca’s poems in it. And to visit Spain shown so lovingly ( I agree that photography is great!)and to see as many works of Dali as possible. And to watch “Little Ashes” again… 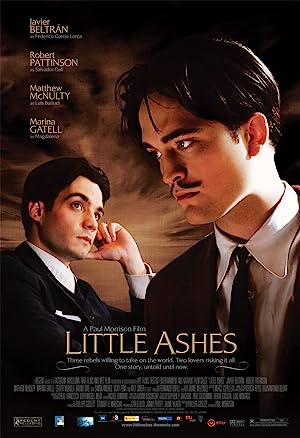 Be the first to review “Little Ashes 2008” Cancel reply