Des is an eleven year old kid who has had a really bad deal in life. Crime and mischief are the main staples of his life and he and his friends cruise around the city and do things like vandalize, steal, light fires, and mug people. He thinks that he is untouchable because he cannot be charged until he is twelve. Cory becomes Des’ best friend and they carry on like nothing can stop them; however, Des ends up at an assessment centre for troubled youths and may begin a new life without crime.

One evening, late Autumn 96 I sat back and causally channel surfed, I ended up on channel 4 (UK) where I was about to witness one of the best films of all time.

From our first introduction to Des, perfectly framed through the windshield shadowed by the angry tones for Violet I knew that this film was going to be something different from the usual TV movies.

The concept of someone hitting the downward spiral is oft covered by small and big budget alike, but to convey it from the eyes of a child, however dangerous on the outside, a sensitive messed up inner beauty is portrayed, a victim of his surroundings without the adult understanding to make sense of it all. Suddenly you realise that this kid who seems to be popular, connected and tough is far from it and is merely fitting the mould society has carved for him and when the pillars of his self, the shreds of normality that his world clings to are torn away he realises that the voices were right, he is alone, he is not special, and his time has run out.

We have see a roller coaster of emotions, with him reverting from adult to child but in the final scene, as the flames lick around him, distorting his treasured drawings, burning his forgotten sanctuary: we realise that there could be no other ending for him, or for the film – the trip hop pining of Portishead Roads that has haunted us throughout the film, reaches crescendo to add the final brevity.

The raw quality of this film and the depth of message is usually out of reach in a TV movie, but not his gem.

Watch it, remember it. 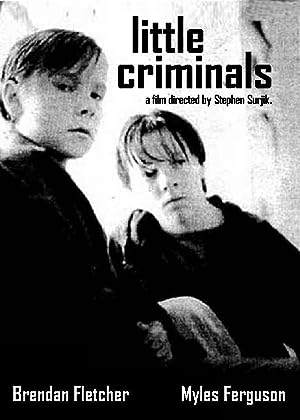 Little Criminals (1995)
120 min|Crime, Drama|N/A
8.1Rating: 8.1 / 10 from 658 users
Des is an eleven year old kid who has had a really bad deal in life. Crime and mischief are the main staples of his life and he and his friends cruise around the city and do things like …
Director: Stephen Surjik
Creator: Dennis Foon
Actors: Brendan Fletcher, Myles Ferguson, Adam Harrison, Jordan Clarke