A young gay boy, from his birth to his teenage years, in which he experiments his sexuality and his own boundaries, to the day he finally meets his father.

Technically an assembly of Hickling’s short film trilogy (L’Annonciation or The Conception of a Little Gay Boy in 2011, Little Gay Boy, chrisT Is Dead in 2012 (which he directed with Amaury Grisel), and Holy Thursday (The Last Supper)in 2013), Little Gay Boy harkens back to a time when queer cinema was joyfully blasphemous, black as night, and playfully experimental in tone and look.

The three parts are telling Jean-Christophe’s story, an initiatory journey from birth through to ultimate re-birth. He is the child of a prostitute mother whom we meet briefly, and an absent father. As an adolescent, JC experiments with his sexuality and pushes the very limits of his identity until he finally meets the father he has fantasised about all his life. Moving between violent and dream- like fantasy worlds, JC’s quest is to carve out 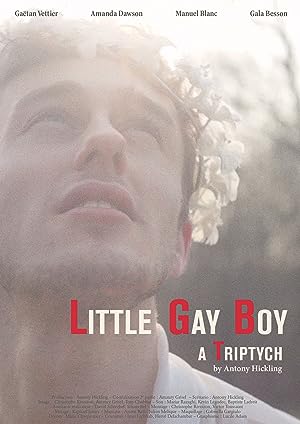 Little Gay Boy (2013)
72 min|Drama|31 Jan 2014
5.0Rating: 5.0 / 10 from 74 users
A young gay boy, from his birth to his teenage years, in which he experiments his sexuality and his own boundaries, to the day he finally meets his father.
Director: Antony Hickling
Creator: Antony Hickling
Actors: Gaëtan Vettier, Manuel Blanc, Amanda Dawson, Gérard Bertin

Be the first to review “Little Gay Boy 2013” Cancel reply