Emily Lindstrom, 14, is an aspiring concert violinist; she’s spending the summer practicing for a big audition while her girlfriends are at camp. She’s also got a thriving neighborhood business: for 50 cents, she’ll keep your secret. Her mother is very pregnant, and her parents seem more concerned about the new baby than anything Emily cares about. A new family moves in next door; their son, Philip, 12, becomes Emily’s friend. Eventually, the weight of Emily’s secrets – her own, the ones she’s keeping professionally, and a secret Philip tells her, send her life temporarily crashing down.

Movie- It’s about a girl named Emily who has a secret about her past. She doesn’t tell anyone one about it. She then encourages the neighborhood kids to come to her with their secrets. (Calling herself the secret keeper). Emily’s friends go off to camp, but she stays behind with her dream of becoming a violinist. The movie starts to get going when she gets two next door neighbors. She becomes friends with one of the neighbors, Philip. During the rest of the movie secrets are told and kept. But two secrets get out in the open. And Emily realizes Secrets are bad.

Pro- I liked the acting of Evan Rachel Wood. And I also liked the overall idea of the movie.

Con-In the end, she ends up with someone. I don’t want to spoil the ending, so I’ll just say it was disappointing.

Overall Rating of the movie-I give it a B+. Some of the scenes were pretty stupid. ( Along with some acting) 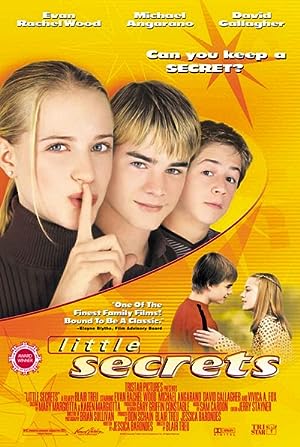 Be the first to review “Little Secrets 2001” Cancel reply