Beers, steers…and a couple of queers. The Eighties come roaring back in this risqué and sexy comedy involving a group of Texas frat-boys, a remote cabin in the Hill Country and lots of beers, that will give “ride ’em cowboy” a whole new meaning!

The second recurring theme has one man stripping completely naked and standing still for another, fully clothed man to ogle. Each of the five main characters did it once each, with another of the five (two, in one instance) as the clothed ogler. Was that supposed to be funny too, or was it just an extremely clumsy way to get as much full frontal (but as sterile as a nun) nudity as possible into the movie? So the movie is almost unbearably contrived, stupid and unfunny. It has two redeeming strengths, though.

Three of the main cast members are genuine Southerners who talk with real Southern accents, not the Hollywood fake-Southern accents non-Southern actors always affect (even Meryl Streep can’t get it right) in movies. Non-Southerners must not be able to tell the difference, but I can, and as a long-time transplant to the North, hearing people who talk like me on screen warms my heart and points out how very, very rarely it happens. Even Southern actors almost never use their native accents in movies, which is sad.

The movie’s other strength is the cast, particularly Derek Villanueva and Dylan Vox, who shine (Jacob Newton, though sort of cute, is a little weak as the lead). I wish someone would remake Longhorns with the same cast but as a serious movie, not a very lame, very unfunny comedy. 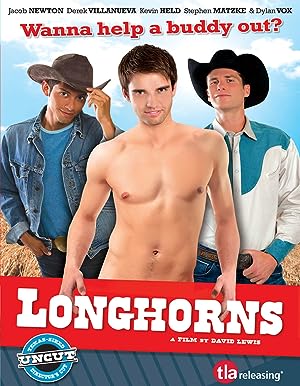 Longhorns (2011)
75 min|Comedy, Drama, Romance|25 Jun 2011
5.5Rating: 5.5 / 10 from 1,183 users
Back in 1982, a Texas University student who was curious about the male sex fantasies he had been having, decides he needs to hook up with an out gay student on campus.
Director: David Lewis
Creator: David Lewis
Actors: Jacob Newton, Derek Efrain Villanueva, Dylan Vox, Kevin Held