Sent to spend the summer on a remote and mysterious island, teenage brothers embark on a thrilling treasure hunt to restore their family’s lost fortune.

Independent films often involve edgy subjects that can make them inappropriate for young people. With Lost & Found, however, writer/director Joseph Itaya has delivered an indie that a whole family could watch together.

After breaking the law, teenage Andy Walton (Justin Kelly) is sent to live with a mysterious uncle his father had never told him about. His younger brother, who senses an opportunity for adventure, begs to go along. They arrive on a creepy island bearing their family name, where they learn that their grandfather was a renowned codebreaker who amassed considerable wealth but disappeared leaving no record of his fortune.

After uncovering clues left by the grandfather, the brothers embark on a treasure hunt under the nose of a developer who hopes to steal their family legacy. Along the way, they must overcome the developer, a spooky forest, early 20th century gadgets and their uncle’s loss of hope.

You’ll likely recognize only two of the cast members: Benjamin Stockham, who played the titular boy in NBC’s About a Boy, portrays younger brother Mark Walton. Jason Patric (The Lost Boys) plays Uncle Trent, a functioning alcoholic who runs a bait shop and constructs ships in bottles. Patric is good, but Stockham provides the bursts of energy that keep the plot moving.

It’s a beautiful picture, with glorious aerial shots of the Washington coast. During a post-screening Q&A at the Sedona International Film Festival, Itaya said he wanted to film the whole thing in the state but couldn’t afford to do so. Instead, he shot in Canada.

Canada also gifted Itaya two last-minute replacement actors: Kelly, who had been on Canadian TV series DeGrassi: The Next Generation, and Celeste Desjardins, who plays Claire, the developer’s daughter and Andy’s romantic interest. Amazingly, Itaya said Desjardins had no acting experience, not even a school play. She is arrestingly beautiful, however, and manages to handle the moderate challenges of the part.

I saw the film with a friend in her 20s, and we agreed that Lost & Found – though somewhat predictable at times, particularly in regard to the treasure hunt – exceeded our expectations. The hunt will entertain younger viewers, while the family dynamics – including an original plot twist – should keep adults interested.

Lost & Found has an important message for young people – that fortune takes many forms other than money. 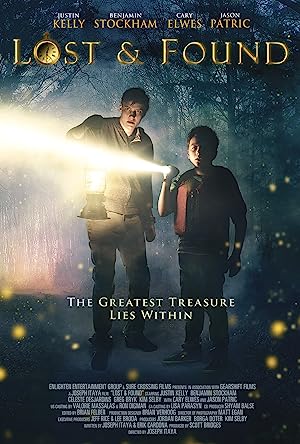 Be the first to review “Lost and Found 2016” Cancel reply