The fractious family of a father and his two sons confront their different feelings and memories of their deceased wife and mother, a famed war photographer.

Insightful drama flick, from Norwegian filmmaker Joachim Trier (in his English-language film debut). The movie tells the story of a husband, and his two sons, that are trying to cope with the death of the boys’ mother. It was directed and co-written by Trier, with Eskil Vogt (Trier’s usual writing partner). The film stars Gabriel Byrne, Jesse Eisenberg, Devin Druid, Isabelle Huppert, David Strathairn and Amy Ryan. It’s a really well made movie, and it’s also intensely involving.

Isabelle Reed (Huppert) was a very famous, and successful, war photographer; until her death, in a horrible car accident. Gene Reed (Byrne), and his sons, Jonah (Eisenberg) and Conrad (Druid), are still trying to get over her death. It appears as though Isabelle’s death was a suicide, and her former coworker, Richard (Strathairn), is about to publish a newspaper article saying so. Gene wants to tell Conrad, who doesn’t know this about his mother’s passing, before the article is released; but Conrad is becoming increasingly hard for his father to talk to. Jonah recently had a child of his own, and he’s just returned home, for the first time in a long while, to spend time with Gene and his depressed brother.

The movie is really well directed, and written, and the performances are all decent as well. It’s a really sad story, with very well thought out and realistic characters. What’s most impressive about the movie, is how inspiring it is (despite all this). Finding light in seemingly overpowering darkness, is a really hard thing to do; but Trier impressively pulls it off. He also tells the story in a pretty fresh, and unique way too. I really like this film. 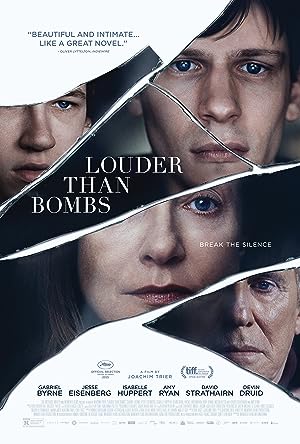 Be the first to review “Louder Than Bombs 2015” Cancel reply