Home » Movies in English » Love and Other Impossible Pursuits 2009

Love and Other Impossible Pursuits 2009

The story of a woman dealing with her daughter’s death while trying to keep her marriage and her relationship with her stepson.

“The Other Woman” or “Love and Other Impossible Pursuits” as it is called, is labeled as a comedy and drama? Comedy? Are you kidding me? The movie is pretty far from being funny. A drama, yes. But comedy? No way…

The story told in the movie is about Emilia having to come to terms with being the stepmother to William, a rather unique child. But at the same time she is struggling with the trauma of having lost her child, a rocky marriage to Jack and having to take the verbal beatings of his ex-wife Carolyne. The movie deals with a lot of good subjects, matters that are close to heart and real life. However, sadly enough, it never really fully delves into these matters, it is just superficially touched. And that is a terrible shame, because the movie had potential to become a very touchy and heartfelt movie. Instead it just came out as a superficial, shallow movie that wanted too much but delivered too little.

As for the cast in the movie, well they had some really good names on the list, lots of good actors and actresses. Natalie Portman portrays Emilia in a very good way, and you do buy into her performance, except for the crying scenes, they were just not sinking in, they didn’t work at all. Lisa Kudrow did a good job as Carolyne (Jack’s ex-wife), however, Kudrow is still stuck with the Phoebe Buffay image, so it was casting a big shadow over her, unfortunately. Charlie Tahan did a marvelous job in portraying the troubled boy William. And he was perhaps the most memorable of all in the movie.

This movie had potential to be great, but it failed to deliver, and that was a shame. When the movie was over, I was left with a thought saying “was that really it?”. I was disappointed in how the movie dealt with the deep matters that were part of the storyline. And as such, I am only rating the movie a 4 out of 10. The superficial nature of the movie drags it way down, but the solid performances of the cast manages to make the movie bearable to sit through.

Sadly, this movie was not all it could have been… 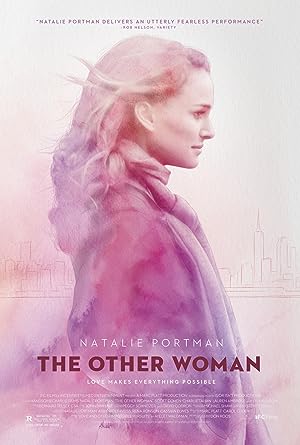 The Other Woman (2009)
102 min|Drama|28 Oct 2010
6.4Rating: 6.4 / 10 from 17,758 users
The story of a woman dealing with her daughter's death while trying to keep her marriage and her relationship with her stepson.
Director: Don Roos
Creator: Don Roos (screenplay), Ayelet Waldman (novel)
Actors: Natalie Portman, Scott Cohen, Lisa Kudrow, Charlie Tahan